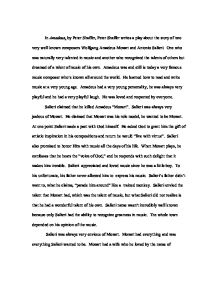 In Amadeus, by Peter Shaffer, Peter Shaffer writes a play about the story of two very well known composers Wolfgang Amadeus Mozart and Antonio Salieri. One who was naturally very talented in music and another who recognized the talents of others but dreamed of a talent of music of his own. Amadeus was and still is today a very famous music composer who's known all around the world. He learned how to read and write music at a very young age. Amadeus had a very young personality, he was always very playful and he had a very playful laugh. He was loved and respected by everyone. Salieri claimed that he killed Amadeus "Mozart". Salieri was always very jealous of Mozart. He claimed that Mozart was his role model, he wanted to be Mozart. At one point Salieri made a pact with God himself. He asked God to grant him the gift of artistic inspiration in his compositions and return he would "live with virtue". Salieri also promised to honor Him with music all the days of his life. When Mozart plays, he confesses that he hears the "voice of God," and he responds with such delight that it makes him tremble. Salieri appreciated and loved music since he was a little boy. To his unfortunate, his father never allowed him to express his music. ...read more.

The carefully throughout thought that went into both of these men's plans caused their purpose to focus more on revenge. The men weren't trying to intentionally provoke anger, it was more of grudges that they held against each other. This hostility only made it worse for them because it would eat at them inside. Mozart and Salieri could have easily been true friends. The anger that existed inside the two men allowed them to become bitter and spiteful towards each other. The reason that Salieri took his anger out on Mozart was because Mozart had been blessed with all of the talent while Salieri only had the desire. Salieri becomes frustrated with Mozart for several reasons. One of the reasons was because Mozart was having relations with a talented young lady whom Salieri was secretly in love with. Another major reason why Salieri was frustrated with Mozart was because Mozart had seemingly endless talent in natural musical ability, and also, Salieri disliked Mozart for winning favor with Vienna and for making Salieri become less popular. Salieri began to think that God was against him. Everything that Salieri wanted and everything he asked God for, he found it in Mozart. Salieri became very furious with God and began to rebel. He makes the conscious decision to destroy God through Mozart in everything he does. His life is now devoted to the destruction of God. ...read more.

Mozart agreed, mostly because he desperately needed the money, and began to write this requiem as was requested by the mysterious man. To Salieri's pleasure, this musical piece was extracting every bit of energy from Mozart, because Mozart still blamed himself for his father's death. Now that the plan was set and everything was working out in Salieris favor, Salieri didn't actually know how to do the actual killing part of Mozart's death. Mozart died from extreme exhausted, yet Salieri was convinced that he was responsible for the killing, that he had poisoned Mozart. Salieri had won his fight with God, but the knowledge lived in him still, he knew he would forever be, the patron saint, of mediocrity. Salieri was a good liar and being two-faced came naturally. The guilt was tearing him up on the inside, though. It is sad that one person can become so consumed with anger and revenge that it takes over their entire being. The poor man wasted valuable portions of his life worrying about how to kill another. It's very sad, but true. Revenge affected Salieri tremendously. Salieri explains to the preacher, "Your merciful God: He destroyed his own beloved [Mozart], rather than let a mediocrity share in the smallest part of his glory. He killed Mozart and kept me alive to torture. Thirty-two years of slowly watching myself become extinct. Mediocrity everywhere: I absolve you!" This lengthy quote shows how Salieri regrets plotting Mozart's death, but it took quite some time for him to establish this remorse. ...read more.