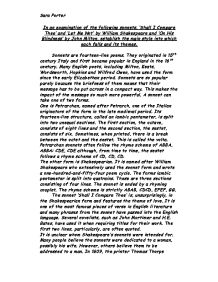 In an examination of the following sonnets, 'Shall I Compare Thee' and 'Let Me Not' by William Shakespeare and 'On His Blindness' by John Milton, establish the main style into which each falls and its themes.

In an examination of the following sonnets, 'Shall I Compare Thee' and 'Let Me Not' by William Shakespeare and 'On His Blindness' by John Milton, establish the main style into which each falls and its themes. Sonnets are fourteen-line poems. They originated in 15th century Italy and first became popular in England in the 16th century. Many English poets, including Milton, Keats, Wordsworth, Hopkins and Wilfred Owen, have used the form since the early Elizabethan period. Sonnets are so popular purely because the briefness of them means that their message has to be put across in a compact way. This makes the impact of the message so much more powerful. A sonnet can take one of two forms. One is Petrarchan, named after Petrarch, one of the Italian originators of the form in the late medieval period. Its fourteen-line structure, called an iambic pentameter, is split into two unequal sections. The first section, the octave, consists of eight lines and the second section, the sestet, consists of six. Sometimes, when printed, there is a break between the octet and the sestet. This is called the volta. Petrarchan sonnets often follow the rhyme scheme of ABBA, ABBA: CDE, CDE although, from time to time, the sestet follows a rhyme scheme of CD, CD, CD. ...read more.

'So long as men can breath or eyes can see, So long lives this, an this gives life to thee.' Shakespeare manoeuvred himself out of a corner with a witty remark. The language in 'Shall I Compare Thee' is quite varied. There are several occasions of personification and metaphor. Shakespeare used personification quite effectively. One such example 'And often is his gold complexion dim'd' is satisfying for the reader as it is an effective and different way of saying 'the clouds hide the sun'. Shakespeare also used metaphors and with great effect. He calls the sun 'the eye of heaven' and the reader knows exactly what he means. 'Let Me Not' is also Shakespearian and features the same theme as 'Shall I Compare Thee', love. 'Let Me Not is another famous sonnet by Shakespeare and, again, it is unknown who it was intended for. Whoever it was, Shakespeare truly loved them. The sonnet is about the ever-lasting love between two people and how nothing can ever stand in their way. Shakespeare spends the first quatrain telling us about his love and how obstacles will not impede it. 'Let me not to the marriage of true mindes Admit impediments,' He then moves on and in the second quatrain he uses navigational imagery, something that would have appealed to the Elizabethans, to portray love as the star which leads people through. ...read more.

'On His Blindness' is a Petrarchan sonnet and discusses the resentment Milton feels at becoming blind at a young age but, being a religious man, he bears it and continues to write in God's name. Milton began losing his sight in his thirties and felt that he could not continue to write. The sonnet expresses his thoughts of this. This sonnet is another famous sonnet, with several phrases adapting into the English language. The octave tells us how half of Milton's days are going to be spent in a 'dark world and wide' but he feels it is 'death to hide' his talent from God and should use it still. He is concerned that if he fails to use his talent, a God-given gift, he will have to face the punishment of hell when he dies. However, Milton is resentful that God expects him to write when he can see nothing. The sestet starts with 'but' clearly suggesting an opposing thought is going to be mentioned. Having stated his resentment, Milton then states Patience's response. He believes that God wants him to accept his misfortune patiently, rather than use his talent in a frantic fashion. The last few lines of this sonnet are the most famous part. They tell how, while some people are required to show lively physical movement in God's service, others can be soberly quiet and still. ...read more.