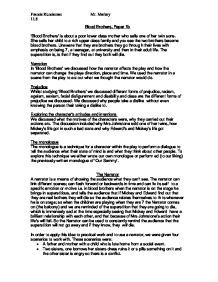 Blood Brothers, Paper 1b 'Blood Brothers' is about a poor lower class mother who sells one of her twin sons. She sells her child to a rich upper class family and you see the two brothers become blood brothers. Unaware that they are brothers they go through their lives with emphasis on being 7, a teenager, at university and then in their adult life. The superstition is, is that if they find out they both will die. Narration In 'Blood Brothers' we discussed how the narrator affects the play and how the narrator can change the plays direction, place and time. We used the narrator in a scene from the play to act out what we thought the narrator would do. Prejudice Whilst studying 'Blood Brothers' we discussed different forms of prejudice, racism, ageism, sexism, facial disfigurement and disability and class are the different forms of prejudice we discussed. We discussed why people take a dislike without even knowing the person their taking a dislike to. Exploring the character's attitudes and intentions We discussed what the motives of the characters were, why they carried out their actions etc. The discussion included why Mrs Johnstone sold one of her twins, how Mickey's life got in such a bad state and why Edward's and Mickey's life got separated. The monologue The monologue is a technique for a character within the play to perform a dialogue to tell the audience what their state of mind is and what they think about other people. To explore this technique we either wrote our own monologue or performed (to our liking) the previously written monologue of 'Our Sammy'. The Narrator A narrator is a means of showing the audience what they can't see. The narrator can link different scenes; can flash forward or backwards in time and can fix its self to a specific emotion or motive i.e. in blood brothers when the narrator is on the stage he brings in superstitious, and tells the audience that if Mickey ...read more.

* Ben convinced you that he was begging for his job and he performed the part well, kept in character, facial expressions showed the emotions of Mrs Johnstone. The facial expressions showed that he really looked like he was begging for his job and that he was afraid of what Mrs Lyons has done by putting the shoes upon the table. * Even though there were only three parts and they had four people in their group they overcame this by giving each other an adequate role. * The groups voice projection was good, kept it clear not too fast or too slow. * The interaction between Ned and Ben was very good, by Ned turning his back and ignoring Ben this gave a sense of Mrs Lyons not caring, which shows power because it shows that Mrs Lyons doesn't actually need Mrs Johnstone to work for her. * Todd and Malcolm both had the same part of being the Narrator, and they both performed well; clear voice and good body language (using hands and not ignoring them). The change from one Narrator to the other was good, they knew when their cues were and didn't speak the other person's lines. Final Summary of the Narrator The narrator in the play 'Blood Brother' plays an incredible part; he is no one because he has no character and yet he plays every single character in the play, so he is everyone. He is a physical representation of the characters thoughts and emotions. He is omniscient he is always the doubt in Mrs Johnstone's mind of what she has done, and he is always the enforcer of superstition and its fatal consequences. His presence brings and eerie feel, the scene when all the kids are playing when they are 7 years old and you see him up on the balcony looking down. It feels like he is this omnipotent being and he is deciding the fate of all the children. ...read more.

I learnt to know that when your on the stage it's your stage no one else's so you do not have to rush what you are saying because you are the one on stage and nobody is their to take it away; space between what you are saying. Also that when Mickey is angry and listing all the things that he is angry about I know that it is a good idea to rise in anger as you progress, because Mickey thinks of one thing which makes him angry then he says another and he knows that there are many things that he is angry about; so it topples on top of all the things he is angry or upset about in one frame of mind. In the workshop I learnt that you must always try your best if you want to become an actor (or any other profession) and that if you have an ambition, you should pursue it fully. The best performance When the people in our group performed I thought that Ned performed well; although there is only one criticism I can offer. His charisma on the stage is very good; he projects his voice and shows very well what the character is feeling. When he was playing Mickey and expressing how Mickey felt about his life he did it in such a way that you felt very sympathetic towards him; me must have emphasised a lot to understand what he feeling. The only criticism I can make is that when he acts as though he is upset or angry he tends to do it all the same. His acting at expressing those emotions are very good but he tends to do the same acting for different characters. I just feel that not everybody is angry or upset in the same way, there are many different ways of being angry so I think he should a larger variety of different ways of expressing different emotions. ?? ?? ?? ?? Francis Runcieman Mr. Markey 11.8 ...read more.