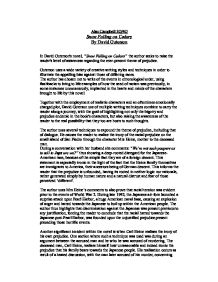 In David Guterson's novel, &quot;Snow Falling on Cedars&quot; the author seeks to raise the reader's level of awareness regarding the ever-present theme of prejudice.

Alan Campbell 3Q/4Q Snow Falling on Cedars By David Guterson In David Guterson's novel, "Snow Falling on Cedars" the author seeks to raise the reader's level of awareness regarding the ever-present theme of prejudice. Guterson uses a wide variety of creative writing styles and techniques in order to illustrate the appalling bias against those of differing races. The author has chosen not to write of the events in chronological order, using flashbacks to bring to life examples of how the seed of racism was previously, in some instances unconsciously, implanted in the hearts and minds of the characters brought to life by this novel. Together with the employment of realistic characters and an oftentimes emotionally charged plot, David Guterson use of multiple writing techniques combine to carry the reader along a journey, with the goal of highlighting not only the bigotry and prejudice endemic in the book's characters, but also raising the awareness of the reader to the real possibility that they too are hosts to such thoughts. The author uses several techniques to expound the theme of prejudice, including that of dialogue. ...read more.

During the argument, which took place aboard Heine's boat later the scene of his death, it became apparent to him that his objections towards the selling of the land which Kabou Miyamoto so desperately desired were merely based upon his and his mothers unfounded umbrage towards the Japanese race. Miyamoto obliterates Heine's views on race with a vexed reply to the deceased man's ideals: "I'm an American... am I calling you a Nazi (for Heine is of German descent)?" With these words Heine is moved to realise how unjustified his objections, how ironic his prejudice. It seems the author had the intent for this scene to remind the reader that there is no true basis to prejudice. David Guterson uses plot effectively to enforce the theme of prejudice that is so evident in this novel. However, the underlying theme of injustice is also obvious. The author uses many incidents within the novel to demonstrate this injustice. The most prominent, and mildly disturbing, of which is that of the female Prisoner of War train scene. This is a very well written section, with the descriptions of the experience, the sounds, the smells and the pains experienced by the 'prisoners'. ...read more.

One prominent style is the use of flashback. Guterson creates many sub-plots within these flashbacks, which he uses to develop and enhance the principal theme. One of these sub-plots is that of Ishmael Chambers' youthful love affair with a young Japanese girl, who later becomes the wife of the accused man. The author uses both this story and the technique of flashback to enhance the issue of prejudice. Through this inline story David Guterson also informs us that racial discrimination was not only present in 'white men', but also in the Japanese race. The writer uses comments including "stay away from white men" as they would desire the young females and "seek to destroy her virginity". Therefore the racial prejudice is heightened, because both parties have fear and hatred of one another. The author has created a story that not only entertains, but also holds a strong moral message. This message is very prominent in this story, being highlighted by style, technique and linguistic flare. In conclusion, this is a very engaging novel, with an engrossingly dramatic plot of love, sorrow and injustice. The author succeeds in provoking self-examination and raising awareness of the issue of prejudice. The author leads the reader to the realisation of the suspiciousness and the ignorantly presumptive attitude so prevalent in human nature. ...read more.