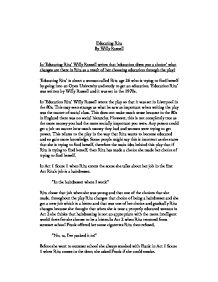 In Educating Rita Willy Russell writes that education dives you a choice what changes are there in Rita as a result of her choosing education through the play?

Educating Rita By Willy Russell In 'Educating Rita' Willy Russell writes that 'education dives you a choice' what changes are there in Rita as a result of her choosing education through the play? 'Educating Rita' is about a woman called Rita age 26 who is trying to find herself by going into an Open University and study to get an education. 'Education Rita' was written by Willy Russell and it was set in the 1970s. In 'Education Rita' Willy Russell wrote the play so that it was set in Liverpool in the 80s. This may seen strange as what he saw as important when writing the play was the matter of social class. This does not make much sense because in the 80s in England there was no social hierarchy. However, this is not completely true as the more money you had the more socially important you were. Any person could get a job no matter how much money they had and women were trying to get power. This relates to the play in the way that Rita wants to become educated and so gain more knowledge. Some people might say this is incorrect as she states that she is trying to find herself, therefore the main idea behind this play that if Rita is trying to find herself, then Rita has made a choice she made her choice of trying to find herself. In Act 1 Scene 1 when Rita enters the scene she talks about her job in the first Act Rita's job is a hairdresser. "In the hairdresser where I work" Rita chose that job when she was young and that one of the choices that she made, throughout the play Rita changes that choice of being a ...read more.

She doesn't realise that some topics are not very polite to talk about, especially with a new tutor in a formal interview. Instead, as soon she sees the picture, she immediately asks Frank, "Do you think it's erotic?" She also frequently uses inappropriate comments, saying, "Look at those tits!" The room initially restricts Rita's movements, and as she is so energetic and enthusiastic, she cant keep still, constantly fidgeting and observing everything. The way she is trapped in the room looking longingly out of the window reflects the way she feels about her life, wanting to escape and have "real" choice, she naively asks Frank, "God, what's it like to be free?" She still does not understand that wherever you are on the social hierarchy you can still have problems. As Rita believes herself to be sophisticated and well read, she has named herself after an author. Her real name is Susan, but Rita Mae Brown is an author, and as Rita likes her books, she laughably adopts her name and believes she is making herself seem more sophisticated, once again showing her complete misunderstanding that sexually explicit n novels are classified as good literature. Such an action again indicates her na�ve outlook and lack of literary awareness at the beginning of the play. There are many themes during the play change is probably the most important as it shows how an individual can develop and learn in both positive and negative ways: the play indicates the protagonist changing from one extreme to the other, eventually discovering a happy balance in between. Rita, at the start, is a very bold character, reflected in her unsophisticated and flamboyant choice of clothing, and is dissatisfied with her life. ...read more.

This shows she has achieved the choice and freedom and also gained in intelligence she wanted. The lighting should no longer be bright as it focused on the protagonist, but muted, and cheerful so the characters can easily be seen yet not too glaring. The music could be classical, classy music, played quietly. This all reflects the change in her more sophisticated and mature character showing she has developed mentally and emotionally enough to become accepted as a member of the middle class. She doesn't judge people as before, but sees them for who they really are, including Frank. She knows he is not the confident secure man he appeared, but weak, insecure and lonely. This shows her increased maturity. More themes are introduced, including maturity. In the middle of the play, she thinks Frank is a mad teacher who wants to throw his students out the window, but by the end, she realises that he made all this possible for her, and her maturity means she isn't too stubborn to thank Frank and truly appreciate what he has done for her. Although she changed in negative ways, she learnt from these. She realises that she doesn't want to risk becoming trapped again, like with Denny, but wants to dictate her own destiny with the choices she makes. The ending is left very open, not telling the theatre viewers what happens to either Rita or Frank, but lets you imagine for yourself what paths they take and where and how they live their lives. This reflects the theme of choice, by letting viewers decide what happens, but also for the characters to decide and change which way they will go and what choices they will make. ...read more.