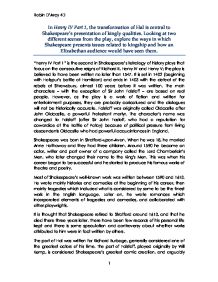 In Henry IV Part 1, the transformation of Hal is central to Shakespeares presentation of kingly qualities. Looking at two different scenes from the play, explore the ways in which Shakespeare presents issues related to kingship and how an Elizabet

In Henry IV Part 1, the transformation of Hal is central to Shakespeare's presentation of kingly qualities. Looking at two different scenes from the play, explore the ways in which Shakespeare presents issues related to kingship and how an Elizabethan audience would have seen them. "Henry IV Part 1" is the second in Shakespeare's tetralogy of history plays that focus on the consecutive reigns of Richard II, Henry IV and Henry V; the play is believed to have been written no later than 1547. It is set in 1402 (beginning with Hotspur's battle at Homildon) and ends in 1403 with the defeat of the rebels at Shrewsbury, almost 100 years before it was written. The main characters - with the exception of Sir John Falstaff - are based on real people. However, as the play is a work of fiction and written for entertainment purposes, they are probably caricatured and the dialogues will not be historically accurate. Falstaff was originally called Oldcastle after John Oldcastle, a powerful Protestant martyr. The character's name was changed to Falstaff (after Sir John Fastolf, who had a reputation for cowardice at the Battle of Patay) ...read more.

They amuse themselves by questioning Falstaff about how he was robbed, and hearing his lies and exaggerations in an attempt to defend his pride. He also takes great offence when it is implied that he is cowardly - this ironic and hypocritical of himself because later in the play he runs away from a battle. He greatly exaggerates the numbers of people he 'fought' with when he was robbed and says he killed two of them. He also describes the clothes they were wearing and Hal points out that Falstaff had just said it was too dark to see his hand. Falstaff continues to try and explain his way out of the situation, but Hal eventually interrupts and tells Falstaff it was in fact him and Poins that robbed him of the money. Falstaff then claims that he knew it was Hal, and that was the only reason he didn't hurt Hal. Bardolph and Peto explain to Hal and Poins that Falstaff chipped his own sword to make it look as if he had been in a fight to back up his story. Shakespeare uses this part of the play primarily to demonstrate Falstaff's cowardice and deceitfulness, and also to display the new political culture of Machiavellianism at that time. ...read more.

He says that Hotspur may have a greater claim to the thrown because of his actions to gain the respect of the public. Hal is clearly upset by his father's comments, and vows to change. He says to King Henry, "I will redeem all this on Percy's head, And in the closing of some glorious day Be bold to tell you that I am your son;" Hal is saying that he will redeem himself by killing Hotspur (Percy) and at the end of that day he will be bold enough to tell him that he is his son. King Henry is very pleased that his son is finally starting to act like a prince, and promises that if a hundred thousand rebels die in the battle, Hal will be king. King Henry IV also announces that he will set off for Bridgenorth whilst Harry will march through Gloucestershire with all their forces and they will meet at Bridgenorth. The mention of the impending battle reinforces the fact that Prince Hal and King Henry are now on the same side: Hal has chosen to permanently leave behind his previous life in the 'underworld' of taverns and lawbreaking. ?? ?? ?? ?? Robin D'Arcy 4D 1 ...read more.