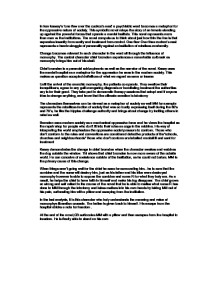 In ken keseay's 'one flew over the cuckoo's nest' a psychiatric ward becomes a metaphor for the oppressive nature of society. This symbolic novel relays the story of an inmate standing up against the powerful forces that operate a mental institute. This novel represents more than man vs the institutions. The novel compels us to think about just how thin the line is that separates insanity from sanity and treatment from control. One flew Over thee cuckoo's nest represents a heroic struggle of personality against an institution of mindless conformity. Change becomes relevant in each character in the ward all through the influence of mcmurphy. The central character chief bromden experiences a remarkable outbreak as mcmurphy brings him out of his shell. Chief bromden is a paranoid schizophrenic as well as the narrator of the novel. ...read more.

can be viewed as a metaphor of society as well MM for example represents the rebellious faction of society that was so loudly expressing itself during the 60's and 70's, he like the hippies challenge authority and brings about change by inciting others to rebel as well. Bromden sees modern society as a mechanical oppressive force and he views the hospital as the repair shop for people who don't fit into their roles as cogs in the michine. His way of interpreting the world emphasizes the oppressive social pressure to conform. Those who don't conform to the rules and conventions are considered defective products of the"schools, churches and neighbourhoods" those who don't conform are labelled mentall ill and sent for treatment Kesey demonstrates the change in chief bromden when the character awakes and watches the dog outside the window. ...read more.

As a result, he helps the chief to have faith in himself and make his fog disappear. The chief grows so strong and self reliant in the course of the novel that he is able to realise what nurse R has done to MM through the lobotomy and takes matters into his own hands by taking MM out of his pain, suffocating him with a pillow and escaping from the institution. In the last analysis, it is this character who truly understands the meaning and value of mcmurphys liberation crusade. The indian is given back to himself. His escape from the hospital stricks a note for freedom . At the end of the novel,CB suffocates MM with a pillow and then escapes from the hospital to freedom. He is finally able to stand on his own ...read more.