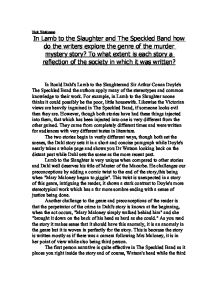 In Lamb to the Slaughter and The Speckled Band how do the writers explore the genre of the murder mystery story? To what extent is each story a reflection of the society in which it was written?

Nick Watkinson In Lamb to the Slaughter and The Speckled Band how do the writers explore the genre of the murder mystery story? To what extent is each story a reflection of the society in which it was written? In Roald Dahl's Lamb to the Slaughterand Sir Arthur Conan Doyle's The Speckled Band the authors apply many of the stereotypes and common knowledge to their work. For example, in Lamb to the Slaughter noone thinks it could possibly be the poor, little housewife. Likewise the Victorian views are heavily ingrained in The Speckled Band, if someone looks evil then they are. However, though both stories have had these things injected into them, that which has been injected into one is very different from the other gained. They came from completely different times and were written for audiences with very different tastes in literature. The two stories begin in vastly different ways, though both set the scenes, the Dahl story sets it in a short and concise paragraph while Doyle's nearly takes a whole page and shows you Dr Watson looking back on the distant past while Dahl sets the scene as the more recent past. Lamb to the Slaughter is very unique when compared to other stories and Dahl well deserves his title of Master of the Macarbe. ...read more.

Wher it says "the empty chair opposite her" it is obvious, her being "Mrs" Maloney that the other chair belongs to her husband and the "whisky" points the mind towards Scotland. There only being two chairs also tells us that she has no children, though later we find she is pregnant. Her being pregnant shows that she is probably young to middle aged. Mary Maloney loved her husband greatly as she waited "for her husband to come home from work" patiently while sewing. She is shown as a kindly woman and very motherly, "there was a slow, smiling air about everything she did". She is described as "tranquil"and "her skin" had "accquired a wonderful translucent quality", her "mouth was soft, and the eyes" "seemed larger, darker than before. That whole description excudesa sense of calm which is completely at odds with her reaction to Mr maloney's revelation. This could be laid down to her pregnancy, pregnancy of course bringing rapid mood swings due to the imbalance of hormones. There are great differences in the detectives in the two stories. Doyle's Holmes is very quick off the mark with everything going on, this is amplified by Watson's apparent slow wittedness and his prompting, nuch like a beautiful person being placed next to an ugly one. ...read more.

Holmes himself was based on a professor Doyle knew at his university. The stories reflect greatly the society and time they were written in, Mrs Maloney would not have gotten away with the crime with modern forensics and the modern police policy of everyone being a suspect. The forensics would have discovered fragments of pork in the wound. However in modern times she wouldn't have been hung so she might have handed herself in, the only reason she was evading the law was because she thought they might not allow her to have the baby before she was hung. Mrs Maloney wouldn't have been perceived as just some poor, little housewife but as a suspect. Doyle's play is very set in the time it was written with the villain looking evil, in a contemporary story he would probably look normal. Helen wouldn't have told the story in the way she did as women are no longer frail, delicate things which need to be protected. Doyle's story was set in a time when the world was very male-orientated, few women these days would act the way she did, they are far more independent now. Detectives in the modern day and age also have far more paperwork to fill out and spend less time on the crime scene also, noone outside of a book could look at a house and know exactly how everything happened. Otherwise they would catch their man everytime. Perhaps Holmes was the Victorian version of Superman. ...read more.