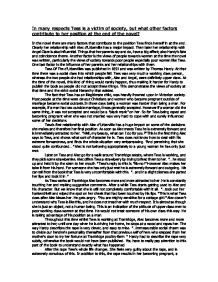 In many respects Tess is a victim of society, but what other factors contribute to her position at the end of the novel?

In many respects Tess is a victim of society, but what other factors contribute to her position at the end of the novel? In the novel there are many factors that contribute to the position Tess finds herself in at the end. Clearly her relationship with Alec d'Urberville has a major impact. Then later her relationship with Angel Clare is also influential. Things that her parents say and do, have a big effect; also Hardy's fate and coincidence theme. Another factor is the views of people towards women at the time the novel was written, particularly the views of society towards poor people especially poor women like Tess. One last factor is the influence of her parents and her relationships with them. Tess Of The d'Urbervilles was published in 1891 and was written by Thomas Hardy. At that time there was a social class into which people fell. Tess was very much a working class person, whereas the two people she had relationships with, Alec and Angel, were definitely upper class. At the time of the novel, this kind of thing would rarely happen, thus making it harder for Hardy to publish the book as people did not accept these things. ...read more.

Her optimism rises and things start to look up. However Tess still has the feelings of guilt and self consciousness, that haunt her. She meets Angel at Talbothay's Dairy, and their relationship develops. This has a massive impact on both Tess's and Angel's lives and without a doubt has a huge influence on the situation Tess finds herself in later in the book. As soon as Tess arrives Angle notices her, just like Alec did. "What a fresh and virginal daughter of nature that milkmaid is!" is Angel's first observation of Tess. He assumes she is a virgin, as she is so young and "innocent", thus making it harder for Angel to believe she was raped. However this is the very beginning of their relationship, the truth about Tess comes out later, when things get more serious. Tess feels unable to speak about her previous experience with Alec as she knows it would be unacceptable. We know that Angel is very different from Alec in character. He is much more respectful and more of a gentleman. He is obviously very attracted to Tess, but is decent and polite; he thinks of her as a Goddess. ...read more.

Her decision at this point was infuenced by many factors already mentioned; the fact that Alec was a constant reminder of what had happened and her sincere love for Angel and desire to erase her past for him. Conincidentally, Angel arrives back from Brazil at this time and is searching for Tess. He has mellowed whilst being away and realises that he was wrong to send Tess away and that he loves her. Again, Hardy's fate and conicidence theme plays a part here - Angel arrives just too late to save Tess. She already has blood on her hands. Tess's ultimate fate is due to a combination of twists and turns throughout the novel. Her poverty has a large infuence on her situation, but also her desire to be 'good' and her guilt at what has happened which affects her decisions. The two men in her life, Alec and Angel contribute hugely to her fate and have important roles to play. Tess is a victim of society certainly, but also a victim of her own human nature and that of the people she has relationships with. The Victorian idea of 'fate' is also a big factor and one which Hardy emphasises throughout the book. It is almost as though Tess were fated to end up the way she did from the very beginning. ...read more.