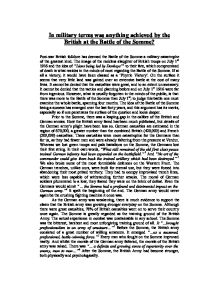 In military terms was anything achieved by the British at the Battle of the Somme?

In military terms was anything achieved by the British at the Battle of the Somme? Post-war British folklore has deemed the Battle of the Somme a military catastrophe of the greatest kind. The image of the reckless slaughter of British troops on July 1st 1916 and the idea of "Lions being led by Donkeys"1 to their fate, which compromised of death is what resides in the minds of most regarding the Battle of the Somme. If at all a victory, it would have been classed as a 'Phyrric Victory'. On the surface it seems that very little land was gained over an extensive battle at the cost of many lives. It cannot be denied that the casualties were great, and to an extent unnecessary. It cannot be denied that the tactics and planning before and on July 1st 1916 were far from ingenious. ...read more.

Whereas we lost green troops and pals battalions on the Somme, the Germans lost their first string. In their own words, "What still remained of the old first class peace trained German infantry had been expended on the battlefield."2 And "No art of the commander could give them back the trained artillery which had been destroyed."3 We also broke some of the most formidable defences on the Western Front. The German trenches, unlike ours, were built for eternal use, but they were forced into abandoning their most prized territory. They had to occupy improvised trench lines, which were less capable of withstanding further attacks. The moral of German soldiers plummeted to a low, they feared they were on the brink of defeat. Even the Germans would admit "... the Somme had a profound and detrimental impact on the German army."4 It spelt the beginning of the end. ...read more.