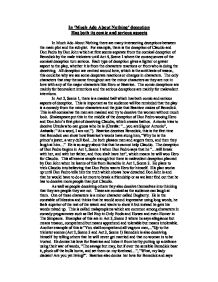 In 'Much Ado About Nothing' deception

In 'Much Ado About Nothing' deception Has both its comic and serious aspects In Much Ado About Nothing there are many intersecting deceptions between the main plot and the sub plot. For example, there is the deception of Claudio and Don Pedro by Don John which at first seems separate from the comical deception of Benedick by the male tricksters until Act 4, Scene 1 where the consequences of the comical deception turn serious. Each type of deception gives a lighter or graver aspect to the play, whether it is from the characters reactions or from who is doing the deceiving. All deception are centred around love, which is the antithesis of reason, this could be why we see some desperate reactions or changes in characters. The only characters that stay the same throughout are the minor characters as they are not in love with any of the major characters like Hero or Beatrice. The comic deceptions are mainly for benevolent intentions and the serious deceptions are mainly for malevolent intentions. In Act 2, Scene 1, there is a masked ball which has both comic and serious aspects of deception. This is important as the audience will be reminded that the play is a comedy from the minor characters and the joke that Beatrice makes of Benedick. ...read more.

or because she is in love with Benedick. She suggests that there is not a man alive who is suited to her, "... he that is more than a youth, is not for me, and he that is less than a man, I am not for him...". We know that she is lying as further on in the play she admits her love for Benedick and he admits his love for her. Beatrice deceives the audience by at first showing that she doesn't really care deeply about anyone but when Hero is disgraced she wants to protect her cousin and bring back her honour by any means possible and orders Benedick to "Kill Claudio.". Hero also deceives everyone by giving the impression that she is a traditional Elizabethan heroine and has a strong father influence but when she is being wooed by Don Pedro she is very talkative and flirtatious. She is more confident and in command of herself, "I may say so when I please.". The male tricksters use hyperbolic language to trick Benedick into thinking that Beatrice is in love with him in Act 2, Scene 3. This is comical because it exaggerates everything and it is even more comical when we learn that Benedick believes what he overheard. ...read more.

This shows urgency as Don John tries to get his brother and Claudio to trust him. Don Johns plan worked and Hero has been dishonoured. Claudio asks Leonato whether he will "give this maid" to him. Act 4, Scene 1 is a potential tragedy and has strong similarities to Romeo and Juliet. For instance, the Friar makes the plan and Hero will deceive everyone by pretending to be dead (she hopes this will make Claudio realise his true feelings for her), there is no comic deception in this scene and there doesn't appear to be any sign of a marriage as it has just been broken off. Benedick is the first one to state that if anyone one do such an evil act as this it would be Don John, "The practice of it lives in John the b*****d". Leonato is so disgraced that he would rather be led than be the leader and is no longer ther key figure in Hero's life. The consequences of the deception of Beatrce and Benedick are also shown in this scene as Benedick chooses his love of Beatrice over his friendship of Don Pedro and decides to challenge Claudio. He is no longer the jester. Also because of Don John's deception Leonato accuses Claudio of being a "dissembler" in Act 5, Scene 1 which is the first time when somebody has actively accused in the play. ...read more.