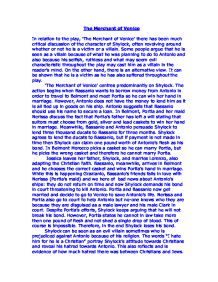 In relation to the play, The Merchant of Venice there has been much critical discussion of the character of Shylock, often revolving around whether or not he is a victim or a villain.

The Merchant of Venice In relation to the play, 'The Merchant of Venice' there has been much critical discussion of the character of Shylock, often revolving around whether or not he is a victim or a villain. Some people argue that he is seen as a villain because of what he was planning to do to Antonio and also because his selfish, ruthless and what may seem evil characteristic throughout the play may cast him as a villain in the reader's mind. On the other hand, there is an alternative view. It can be shown that he is a victim as he has also suffered throughout the play. 'The Merchant of Venice' centres predominantly on Shylock. The action begins when Bassanio wants to borrow money from Antonio in order to travel to Belmont and meet Portia so he can win her hand in marriage. However, Antonio does not have the money to lend him as it is all tied up in goods on his ship. Antonio suggests that Bassanio should use his name to secure a loan. In Belmont, Portia and her maid Nerissa discuss the fact that Portia's father has left a will stating that suitors must choose from gold, silver and lead caskets to win her hand in marriage. Meanwhile, Bassanio and Antonio persuade Shylock to lend three thousand ducats to Bassanio for three months. Shylock agrees to lend the ducats to Bassanio, but if payment is not made in time then Shylock can claim one pound worth of Antonio's flesh as his bond. ...read more.

Tell not of mercy. This is a fool that lent out money gratis Gaoler". Shylock is bringing up the past to put his point across. He is looking for any excuses to put Antonio down. The evidence reveals again to the readers that he can't bear Antonio. Another point which may convince us that Shylock is a villain is when he doesn't want to break his bond: "By my soul I swear there is no power in the tongue of man to alter me. I stay here on my bond". This reveals that he will not give up his bond for any-one, no matter what happens and he will keep his bond and tolerate no disagreements. However, we sense that Shylock is aware that he is in the wrong and has nothing to say except keeping to his bond. He is, in these urgent tones, trying to prove to the court that he is right. Shylock has no money to live on at this point but he is being arrogant and he does not care. He just wants Antonio dead and in his mind he wants his daughter back. Also he wants to accept Antonio's terms but he won't because of his reputation which he has to keep. When he realises that he cannot shed a drop of Antonio's blood, he is dumbstruck, as Portia observes: "Why doth a Jew pause?" Shylock's reaction is instant. He is almost beaten and so demands- "give me my principal and let me go". ...read more.

All he can say is "I am content". In reality, he has lost everything and begs pathetically, "I pray you, give me leave to go from hence, I am not well". Once again this illustrates him as a victim and we can identify with, in part, his pain. In conclusion, I think Shylock has been seen as a victim because he has been discriminated against for being a Jew by Antonio and his friends. Also he has suffered abuse from them causing us to have sympathy for him. Shylock loses everything he has had, his wealth and his daughter, Jessica, which makes him suffer in sorrow. However, Shylock in addition is depicted as a villain at the beginning of the play because he was being clearly sly and deceitful and wanted Antonio dead. However, thorough analysis of the play has revealed that Shylock only wanted Antonio dead because Antonio mistreated him. Moreover, Shylock has even lost his pride to a certain extent as Antonio demands "he presently become a Christian". Shylock's daughter leaving him, too, has caused him sorrow and upset. To make the situation worse he has lost his money. Shylock has no option but to beg for Antonio's forgiveness because his other option is to die. Admittedly, Shylock to a certain extent can also be portrayed as a villain and there is a lot of evidence for this, but I think Shylock has suffered enough for his evil acts. Shylock seems to suffer more than anybody else and overall I would conclude that Shylock is a victim more than a villain. ...read more.