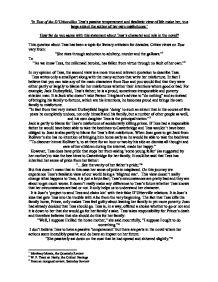 'In Tess of the D'Urbervilles Tess's passive temperament and fatalistic view of life make her, to a large extent the author of her own misfortunes.'How far do you agree with this statement about Tess's character and role in the novel?

'In Tess of the D'Urbervilles Tess's passive temperament and fatalistic view of life make her, to a large extent the author of her own misfortunes.' How far do you agree with this statement about Tess's character and role in the novel? This question about Tess has been a topic for literary criticism for decades. Critics views on Tess vary from: "She rises through seduction to adultery, murder and the gallows."1 To "As we know Tess, the milkmaid heroine, has fallen from virtue through no fault of her own."2 In my opinion of Tess, the second view is a more true and relevant quotation to describe Tess. Tess writes only a small part along with the many authors that write her misfortune. In fact I believe that you can take any of the main characters from Tess and you would find that they were either partly or largely to blame for her misfortunes whether their intentions where good or bad. For example; Jack Durbeyfield, Tess's father; he is a proud, sometimes irresponsible and poverty stricken man. It is Jack who doesn't take Parson Tringham's advice to "do nothing" and so instead of bringing his family to fortune, which are his intentions, he becomes proud and brings his own family to misfortune. "In fact from that very instant Durbeyfield begins 'doing' to such an extent that in the course of five years he completely undoes, not only himself and his family, but a number of other people as well, and his own daughter Tess is the principal victim."3 Jack is partly to blame for Tess's misfortune of accidentally killing prince. ...read more.

People 'insist' or 'beg' that she acts; they don't ask; she is not complying to be passive but obeying. Tess also seems to be most passive in times when she is very depressed. An example of this is when she has just left Alec and has returned home: "Her depression was then terrible and she could have hidden herself in a tomb."* The time when Tess is so desperate to have Angel forgive her and love her after she confesses her misfortunes to him is another example of being passive when she is depressed or in this case desperate. Angel is in a 'somnambulistic state' and he is walking with Tess in his arms. Tess is being passive and she lets him take her: "If it had been to save her weary life she would not, by moving or struggling, have put an end to the position she found herself in." This example put together with the other example of Tess' depression shows that Tess is exhibiting her own death wish. In times when Tess is depressed she doesn't only become passive but wants to die. In the last chapters of the novel Tess has had all her spirits broken. She is not consciously aware of what she is doing. Tess is "a mere corpse drifting with the current"5. This is the time when Tess is being most passive. But this isn't Tess's true temperament that we are seeing here; this is a temperament of a truly heartbroken and grief-stricken woman. ...read more.

A theme that is also parallel to both Tess and Jude is fate. The quotation that relevantly connects the two is: "Tess had hoped to be a teacher at this school but fate seemed to decide otherwise."* Jude had hoped to be a scholar also but like Tess fate seemed to stop him. There is one 'author' of Tess's misfortunes who I have yet to mention; 'the President of the Immortals'. Tess believes in God and through her misfortunes recognises that if He is to exist then He must have some part in her 'life story': "...Whom she could not class definitely as the God of her childhood, and could not comprehend as any other."* 'Justice' is the word Hardy uses to describe Tess's execution. It is unclear whether Hardy meant that it was justified that Tess should be hanged in the eyes of society or whether it was justice that Tess's sufferings have finally come to an end. Hardy may have been sarcastic when he used this word. To the people in Tess's society who didn't hear the whole story, those who didn't make any exceptions for people like Tess and those were so manipulated by society's rules believed that justice had been done. Perhaps Tess was a 'Pure woman' in the eyes of God and it was his 'sport with Tess' that made her anything less. In my opinion, Tess doesn't have a passive temperament. Though she can be seen to be passive in the novel I believe that other people, their views put there by society and fate have a much bigger part to play in writing Tess's misfortunes. ...read more.