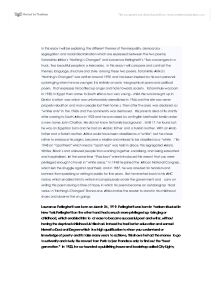 In the essay I will be exploring AFRIKA

In this essay I will be exploring, the different themes of the inequality, democracy, segregation and racial discrimination which are expressed between the two poems; Tatamkhlu Afrika's "Nothing's Changed" and Lawrence Ferlinghetti's "Two scavengers in a truck, Two beautiful people in a Mercedes. In this essay I will compare and contrast the themes, language, structure and style among these two poems. Tatamkhlu Afrika's "Nothing's Changed" was written around 1990 and has been inspired by his own personal up-bringing when he was younger; it is entirely an auto-biographical poem and political poem. That expresses his bottled up anger and hate towards society. Tatamkhulu was born in 1920; In Egypt then came to South Africa as a very young- child. He was brought up in District 6 which was which was unfortunately demolished in 1966 and the site was never properly rebuilt on and many people lost their homes. Then after the area was declared as "whites only" in the 1960s and the community was destroyed. His parents died of flu shortly after coming to South Africa in 1923 and he was raised by an English Methodist family under a new name John Charlton. He did not know his family background. Until 17, he found out; he was an Egyptian born and he had an Arabic father and a Turkish mother. ...read more.

"Whites only inn" racial discrimination no black people are permitted to go on in the site. Like they would have the courage to set foot in the restaurant, after they have been racially segregated, deprived, repressed, demoralized ethically and morally. Now they would not have the audacity to even think of going in. Whilst white people are dining in the most exclusive "haute cuisine" restaurant drinking out of "white glass" and being surrounded by luxurious "linen", on the other side of the "clear panes" which seems to be a barrier to divide Sophistication and a Dump. The Black people eat "down" the road and the poet gives us a sense of how lower down physically and socially they are. They eat in a "working man's cafe" which suggest they must eat quickly and get back to work unlike the white people in the "up-market" restaurant. This suggests money, luxury and leisure to take time and enjoy the "haute cuisine." The poet does not mention work, when talking about the white people's restaurant. Afrika also gives us an image of plastic, greasy, uncomfortable, unappetising and un-healthy food like "bunny chow" which is a poor man's hamburger made with the cheapest fish called pilchards. These people have lost the dignity to even eat properly; they cannot even afford a standard hamburger. ...read more.

It is only "the very red light" that brings these two separate worlds together, to a few short moments. Only by coincidence, they are not friends stereotypically judging superior, well mannered people; they wouldn't want to associate with people below their calibre. Ferlinghetti shows this image by stating "in the high seas of this democracy" or narrow mouth that should be easy to cross. Yet we also think of the other meaning of gulf - a deep chasm or abyss. It may look possible to cross, they are deluded into thinking the impossible can be made possible. Both of these poems are about the differences between rich and poor people in society. In both poems, the main theme is that people are segregated in the society they live in. However, in 'Nothing's Changed' this poem explores racial segregation in South Africa during the apartheid separating the whites from the blacks such as the 'whites only in caf�' In contrast to the racial segregation in 'Nothing's Changed', 'Two Scavengers in a Truck, Two Beautiful People in a Mercedes' explores the separation in the society by the wealth, the person holds in relation to how good the persons physical looks are. They are both political poems which are concerned with Democracy and equality and they both use graphic imagery to convey their messages. For example "flaring like a flag" He uses assonance and alli ?? ?? ?? ?? ...read more.