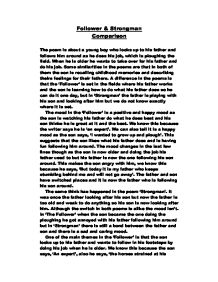 Follower & Strongman Comparison The poem is about a young boy who looks up to his father and follows him around as he does his job, which is ploughing the field. When he is older he wants to take over for his father and do his job. Some similarities in the poems are that in both of them the son is recalling childhood memories and describing theirs feelings for their fathers. A difference in the poems is that the 'Follower' is set in the fields where his father works and the son is learning how to do what his father does so he can do it one day, but in 'Strongman' the father is playing with his son and looking after him but we do not know exactly where it is set. The mood in the 'Follower' is a positive and happy mood as the son is watching his father do what he does best and his son thinks he is great at it and the best. We know this because the writer says he is 'an expert'. We can also tell it is a happy mood as the son says, 'I wanted to grow up and plough'. ...read more.

He has great control of the horses too, as it says he can tell them where to go just by clicking his tongue, 'the horses strained at his clicking tongue'. Also the simile, 'his shoulders globed like a full sail strung' is saying he is broad and is being compared to a ship. His movement is powerful and graceful. On the other hand in 'Strongman' there isn't the same emphasis on skill, as he is looking after his son not so much teaching him. Although it does mention that he is a carpenter and that job takes a lot of skill. In 'Follower' the father's physical strength is conveyed by the writer saying, 'sometimes he rode me on his back'. This suggests he has a lot of physical power as he is doing his tiring and hard job but can still hold his sons weight on his back. Also it says, 'in his broad shadow'. Broad shadow implies that he is very muscular and has a huge figure. In 'Strongman' the father's physical strength is conveyed by the writer saying, 'home from work, would stretch his arms and hang his five sons from them'. ...read more.

Also there has been a role reverse as the son used to be the one following his father around the field and tripping and falling but now his father is following him around and keeps stumbling. There is a use of repetition as the narrator says he used to stumble along but now his father does instead. The difference in the father in the second verse of 'Strongman' is that there is once again a role reverse. The father was extremely physically strong in the first verse and used to look after and play with his son but now in the second verse he has become old and weal and his son now has to look after him. There is still a close bond between them as the son is helping his father to do everything, even to 'lift him to the lavatory'. I prefer and find most moving 'Strongman'. I find this more moving than 'Follower' because there is a close bond between father and son all the way through and they are both there for each other. Whereas in 'Follower' they started off close but ended up being rather annoyed at each other. I also find 'Strongman' more moving because of the way the narrator describes his father and the way that in the last few lines the son is reassuring and telling his father, 'No trouble, no trouble, Dad'. ...read more.