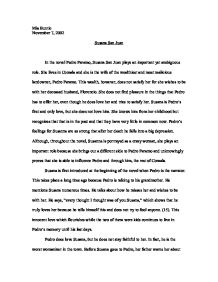 Mia Buntic November 7, 2002 Susana San Juan In the novel Pedro Paramo, Susana San Juan plays an important yet ambiguous role. She lives in Comala and she is the wife of the wealthiest and most malicious landowner, Pedro Paramo. This wealth, however, does not satisfy her for she wishes to be with her deceased husband, Florencio. She does not find pleasure in the things that Pedro has to offer her, even though he does love her and tries to satisfy her. Susana is Pedro's first and only love, but she does not love him. She knows him from her childhood but recognizes that that is in the past and that they have very little in common now. Pedro's feelings for Susanna are so strong that after her death he falls into a big depression. ...read more.

Pedro does love Susana, but he does not stay faithful to her. In fact, he is the worst womanizer in the town. Before Susana goes to Pedro, her father warns her about him, "Don't you know that he's married, and that he's had more women than you could count?" (84). Suprisingly, Susana reacts to this with complete indifference and confirms to her father that she is mad. Pedro, on the other hand, is absolutely rejoiced with her acceptance to marry him. He tells her "I waited thirty years for you return, Susana," "And weep I did, when I learned that at last you would return to me." (82, 83). Pedro's words to Susana evoke feelings of sympathy for Pedro. He presents himself as a love struck man who has done nothing but good in his life and deserves to have Susana, the one thing that is missing in hid life. ...read more.

Her life at this point is so miserable that she tells, Justina, her caretaker "I only believe in hell." A woman in that kind of emotional distress would probably be weak and unimportant, but she is just the opposite. Even with her sickness, Susana has the most control over Comala. She is not aware of this, and it is not important to her. Her only concern is to escape the reality that she has to face. Her influence is most obvious after her death, when Pedro falls into a depression and isolates himself. Susana, because of her indispensability to Pedro is the most influential character in the novel. She is able to change the destiny of Comala and display a different side to Pedro. Because of her, Pedro has a human side to him. She, also, weakens him, and her death destroys him and the rest of the town. Her innocence and sexuality transform the destiny of the whole city. ...read more.