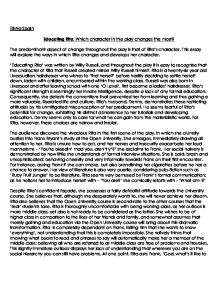 In the play Educating Rita, which character changes the most?

Elisha Spain Educating Rita: Which character in the play changes the most? The predominant aspect of change throughout the play is that of Rita's character. This essay will explore the ways in which Rita changes and develops her character. 'Educating Rita' was written by Willy Russell, and throughout the play it is easy to recognise that the character of Rita that Russell created mirrors Willy Russell himself. Rita is a twenty-six year old Liverpudlian hairdresser who wishes to 'find herself' before hastily deciding to settle herself down, laden with children, encumbered within the working class. Russell was also born in Liverpool and after leaving school with one 'O Level', first became a ladies' hairdresser. Rita's significant strength is seemingly her innate intelligence, despite a lack of any formal education. Consequently, she detests the conventions that prevented her from learning and thus gaining a more valuable, liberated life and culture. Rita's husband, Denny, demonstrates these restricting attitudes by his unmitigated misconception of her predicament. He seems fearful of Rita's potential for change, exhibiting his distinct abhorrence to her tutorials and developing education. Denny seems only to care for what he can gain from the materialistic world. For Rita, however, these choices are narrow and insular. The audience discovers the vivacious Rita in the first scene of the play, in which she clumsily bustles into Frank Bryant's study at the Open University. She emerges, immediately drawing all attention to her. ...read more.

Rita and Frank both appeal to the audience's emotion due to their feelings of both being 'outsiders' in their social strata. Regardless of Rita's social naivety, immaturity and slight ignorance, Frank and Rita still seem to 'click'. The social gulf between them is wide; Frank is intellectually superior and their lifestyle differences are numerous. However, they seem to be both outsiders - neither playing the game assigned to them by background and birth. Frank has a drink problem and has suffered much loss of respect from his students and colleagues, whereas Rita feels completely 'out of touch'. Rita endears Frank with her innocent, 'child-like' charm and witty observations. Initially, Frank seems taken aback by Rita's blunt assessments. For instance, when viewing a particular erotic painting in Frank's study, Rita exclaims crudely, 'Look at those tits!' However, Frank does not judge her harshly. He is disinterested in his current students who lack that individual spark that Rita possesses; they simply regurgitate common literary criticism. Rita is refreshingly bold and vivacious. Even her awkward attempts at criticism at the start of the play are surrounded by quick-witted dialogue and as the play progresses these layers of ignorance are peeled away and she can apply her wit to the academic work in hand. Frank has his own negative experience of academia and knowledge for knowledge's sake. He initially refuses to teach her, not wanting to allow her to displace her energetic character and uniqueness, to be replaced by a mundane someone with the same banal views as every other student. ...read more.

Frank feels she has been taken away from him, and continues to drink to keep these inclinations removed from his foremost thought. It is significant during this part of the play that Frank seems at his most vulnerable and isolated. The audience can sympathise him; they may too miss the original, spontaneous and comic Rita. Eventually, Rita understands how her transformation has not been entirely beneficial to her character. This supplements the social idea that perhaps a formal education does not automatically create superiority. Rita has merely moved from one extreme to another, not yet finding the balance between the two. However, she finally does find the medium, becoming more sophisticated, wiser and composed, whilst retaining her original edge and quirkiness. Rita is liberated and emancipated; set free from social restrictions placed upon her by her class. The predominant change is that she now possesses many choices - 'I've got choices now'. Her chains have been cut and she is no longer tethered; she can do what she wants to do; go where she wants to go; and live the life she wants to lead. Rita understands that an education and a culture do not automatically create happiness, and she is educated enough to realize that both classes have their flaws. Her story is an irrevocably uplifting message, which could be considered a rarity in a naturalistic play. It seems implausible that her story could replicate a believable everyday reality. She represented the socially underrated married woman, who felt painfully 'out of step'. By the end of the play, she has managed to incorporate her ideal self with her true self, and is now truly 'in-step'. ...read more.