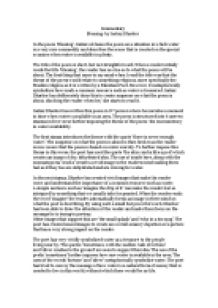 In the poem Blessing, Imtiaz Ali bases the poem on a situation in which water is a very rare commodity

﻿Commentary Blessing- by Imtiaz Dharker In the poem ?Blessing?, Imtiaz Ali bases the poem on a situation in which water is a very rare commodity and describes the scene that is created on the special occasion when water is available in plenty. The title of the poem is short, but not straightforward. When a reader initially reads the title ?blessing?, the reader has no clue as to what the poem will be about. The first thing that came to my mind when I read the title was that the theme of the poem would relate to something religious, more specifically the Muslim religion, as it is written by a Pakistani Poet. However, it metaphorically symbolizes how much a common resource such as water is treasured. Imtiaz Dharker has deliberately done this to create suspense on what the poem is about, shocking the reader when he/ she starts to read it. Imtiaz Dharker has written this poem in 3rd person where he narrates a moment in time when water is available in an area. ...read more.

When the reader reads the word ?imagine? the reader automatically forms an image in their mind on what the poet is describing. By using such a small but powerful word, Dharker has been able to draw the attention of the reader and make them focus on the message he is trying to portray. Other images that support this are ?the small splash? and ?echo in a tin mug?. The poet has created sound images to create an overall sensory depiction of a picture that has a very strong impact on the reader. The poet has very vividly symbolized water as a treasure to the people living near by. The quotes ?Sometimes, with the sudden rush of fortune? and ?silver crashes to the ground? are seen to support this idea. The use of the prefix ?sometimes? further imposes how rare water is available in the area. The uses of the words ?fortune? and ?silver? metaphorically symbolize water. The poet has tried to convey the message of how water is a natural form of money that is needed to live in this world, without which there would be no life. ...read more.

The lack of punctuation used in the 3rd stanza helps further impose the idea of urgency in the poem. ?Every man woman child for streets around buts in? is a quote to support this. The lack of punctuation automatically makes the reader read this line in a hurry therefore making the reader feel a sense of exhaustion and hurriedness. Further more, ?every man woman child? suggests that so many people rely on one ?municipal pipe? further imposing the rarity of water in the area. We take many things for granted in our lives. Water, food and electricity are just a few. The poem ?Blessing? by Imtiaz Dharker sends a reality check to those who are not aware of it. Through this poem, Dharker sends a strong message of how many parts of the world don?t receive common resources such as water making the reader feel more genuinely appreciative of the things they get. The poet uses several language techniques in order to portray this message, which is successful, impacting the reader at great heights with such simple words. ________________ Tishya Rao 11.4 ...read more.