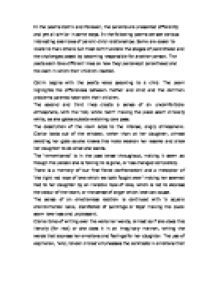 In the poems Catrin and Follower, the parents are presented differently and yet all similar in some ways.

In the poems Catrin and Follower, the parents are presented differently and yet all similar in some ways. In the following poems we see various interesting examples of parent-child relationships. Some are easier to relate to than others but most communicate the stages of parenthood and the challenges posed by becoming responsible for another person. The poets each take different lines on how they perceive/d parenthood and the each in which their children reacted. Catrin begins with the poet's voice speaking to a child. The poem highlights the differences between mother and child and the common problems parents have with their children. The second and third lines create a sense of an uncomfortable atmosphere, with the 'hot, white room' making the place seem clinically white, as she gazes outside watching cars pass. The description of the room adds to the intense, angry atmosphere. Clarke looks out of the window, rather than at her daughter, almost avoiding her gaze as she knows this make weaken her resolve and allow her daughter to do what she wants. ...read more.

She looks powerful, 'with your straight, strong, long brown hair and your rosy, defiant glare', making her seem the one in control. The image of the rope is brought in again, with the idea of the daughter tightening it 'about my life, trailing love and conflict' so the rope metaphorically is a tie between the two of them that, despite their differences, seems to bring them closer. Despite their intense feelings, they can't escape from each other. The argument is about whether the daughter can stay outside in the dark skating for 'one more hour', which brings about the present conflicts of growing up and letting go. 'Dark' links to fears and could suggest both the very natural fears of the parents and the fearless nature of children; may be it suggests a desire to stay in the womb perhaps, or it Could suggest the fact that both parent and child are still 'in the dark' about each other. However, in Follower, the poem examines Heaney's relationship with his father and the effects of ageing. ...read more.

The final words 'and will not go away' seem harsh, as if Heaney finds his father an irritant, yet his father put up with him when he was a young boy, getting in the way. It almost seems selfish, but possibly shows how people do find caring for their elderly relatives a difficult thing to do. I think that the end stanza indicates that Heaney's dad is following him as a ghost. Heaney now sees his father as a burden; he cannot tolerate his father who was prepared to withstand his childish behaviour when he was young. I think that Heaney's attitude towards his father has certainly altered, mainly due to the inconveniences of old age and the burdens they have caused. Catrin is different because its irregular line endings and stanzas is also a symbol of conflict between parent and child, which Follower's structure does not symbolise. However different the parents in both poems may be, they all love their children, and are saddened when the children no longer has dependency on the parents. ...read more.