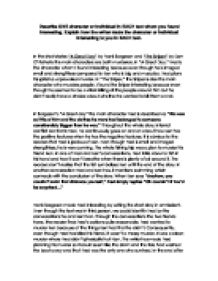 In the short stories A Great Day by Frank Sargeson and The Sniper by Liam OFlaherty the main characters are both murderers. In A Great Day, Fred is the character whom I found interesting

Describe ONE character or individual in EACH text whom you found interesting. Explain how the writer made the character or individual interesting to you in EACH text. In the short stories "A Great Day" by Frank Sargeson and "The Sniper" by Liam O'Flaherty the main characters are both murderers. In "A Great Day," Fred is the character whom I found interesting because even though he is imaged small and strengthless compared to Ken who is big and muscular, Fred plans his spiteful, unprovoked murder. In "The Sniper," the Sniper is also the main character who murders people. I found the Sniper interesting because even though he seemed to be a villain killing all the people around him but he didn't really have a choice about whether he wanted to kill them or not. In Sargeson's "A Great day" the main character Fred is described as "this was so little of him and the clothes he wore had belonged to someone considerably bigger than he was." Throughout the whole story, internal conflict confronts Fred. ...read more.

Consequently, even though Fred has killed his friend, it wasn't a messy murder. It was a clean murder where Fred didn't physically hurt Ken. The writer has made Fred planning his murder so it could seem like the storm and the tide had washed the boat away and that Fred was the only one who survived. In the end after Fred has swum away from the boat and from Ken, he reveals himself to be a petty, cold person who lacks any positive feeling for a man who is supposed to be his friend. Also in O'Flaherty's short story there is murder involved. The Sniper is a republican sniper who is described as "his face was the face of a student thin and ascetic, but his eyes had the cold gleam of the fanatic. They were deep and thoughtful, the eyes of a man who is used to looking at death." In this story, external conflict confronts the Sniper because of the things in the world around him. ...read more.

The battle-hardened Sniper undergoes a transformation. The excitement of the battle fades. His disgust for the civil war manifests itself physically, as his teeth begin to chatter, and he starts cursing both himself and the war. When the Sniper recovers his senses, his fear dissipates so much that he even risks being shot at to learn the identity of the Free State soldier he has just shot. Only then does he realise that he has killed his own brother. Both of these stories look at two different characters murdering someone. While in Sargeson's story Fred kills his friend because Ken has everything that Fred doesn't when in O'Flaherty's story, the Sniper kills the people because it is his duty as a solider to do what he is asked to do. Also both texts are written in the point of omniscient. In O'Flaherty's story he has made it difficult for the readers to identify the Sniper because he doesn't want the readers being close to the Sniper's thoughts and feelings whereas in Sargeson's story we identify Fred through the conversations and the actions he take. ?? ?? ?? ?? ...read more.