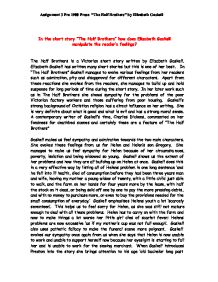 In the short story &amp;#147;The Half Brothers&amp;#148; how does Elizabeth Gaskell manipulate the reader&amp;#146;s feelings?

In the short story "The Half Brothers" how does Elizabeth Gaskell manipulate the reader's feelings? The Half Brothers is a Victorian short story written by Elizabeth Gaskell. Elizabeth Gaskell has written many short stories but this is one of her best. In "The Half Brothers" Gaskell manages to evoke various feelings from her readers such as admiration, pity and disapproval for different characters. Apart from these reactions she evokes from the readers, she manages to build up and hold suspense for long periods of time during the short story. In her later work such as in The Half Brothers she shows sympathy for the problems of the poor Victorian factory workers and those suffering from poor housing. Gaskell's strong background of Christian religion has a direct influence on her writing. She is very definite about what is good and what is evil and has a strong moral sense. A contemporary writer of Gaskell's time, Charles Dickens, commented on her fondness for deathbed scenes and certainly these are a feature of "The Half Brothers" Gaskell makes us feel sympathy and admiration towards the two main characters. She evokes these feelings from us for Helen and Helen's son Gregory. She manages to make us feel sympathy for Helen because of her circumstances, poverty, isolation and being widowed so young. Gaskell shows us the extent of her problems and how they are all building up on Helen at once. Gaskell does this in a very effective way by listing all of Helens problem in one long sentence 'and he fell into ill health, died of consumption before they had been three years man ...read more.

Preston holds a grudge on Gregory right from the very start. But we must admire Gregory for not begrudging him or any other person who treats him badly even if they have just been nasty to him, he would 'do a kind turn for anyone, even if they had been scolding him'. He is parallel to his mother. This helps us to warm to him as a character. Gregory is stoical and endures things with uncomplaining patience which's helps us to admire him. Gaskell creates a character that speaks highly of Gregory. Nearly every one of the farm workers has a bad thing to say about him apart from old Adam. Gregory is sent out onto the hills as a Shepard with along with Adam who trains him. Adam is the only person apart from Gregory's mother who has not got a bad word to say about him, but indeed praises him. This is likely to the fact that Adam was 'almost the first person who had a good opinion of Gregory' and even told this to his boss, Preston. Later in the story when the narrator goes missing, Gregory goes out in the thick snow to look for his half brother risking in his own life and not even thinking about it. This also seems parallel to Helen who had done similar for Gregory by putting Gregory first and looking out for him without even thinking about it. When Gregory manages to find the narrator, Gaskell makes us feel even more admiration for him. ...read more.

The suspense is mounted to see whether or not lassie can get back to the ranch before the pair die of the cold. Then the narrator 'fell asleep'. We think is the end, he has fallen asleep he will die. But then a sense of relief comes over us when we find that the narrator has been found just time and survives, but Gregory is not so lucky. Through out the story "The Half Brothers" Gaskell evokes and manipulates many of our feelings. But some readers, including myself find that some of the story mawkish and trying to push at our emotional buttons in an unsophisticated way. Gaskell style of writing helps to manipulate our feelings. The way she portrays Helen's and Gregory's lives makes us feel a lot of sympathy towards them but we admire the way they put up with everything without complaining. She creates a character, which seems to be the bad guy of the story and evokes complex feelings for him from us. Some readers including myself may find that Preston is an horrid man and continue to think the same even when Gaskell tries to soften his image by saying that he has become 'humanised', but others may feel that he is a good man at heart and this is portrayed at the end of the story when he is deeply regretful. Gaskell is very good at creating suspense and makes us worried about the characters and makes us want to read on. So overall Gaskell is very good at manipulating our feelings. ?? ?? ?? ?? Assignment 3 Pre 1900 Prose "The Half Brothers" by Elizabeth Gaskell ...read more.