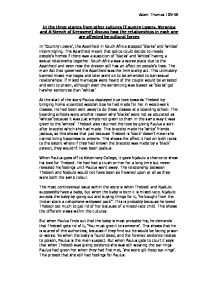 In the three stories from other cultures (Country Lovers, Veronica and A Stench of Kerosene) discuss how the relationships in each one are affected by cultural forces

In the three stories from other cultures (Country Lovers, Veronica and A Stench of Kerosene) discuss how the relationships in each one are affected by cultural forces In 'Country Lovers', the Apartheid in South Africa stopped 'blacks' and 'whites' intermingling. The Apartheid meant that police could decide to invade people's homes if there was a suspicion of 'blacks' and 'whites' having a s****l relationship together. South Africa was a worse place due to the Apartheid and even now the division still has an affect on people's lives. The main Act that governed the Apartheid was the Immorality act. This ultimately banned mixed marriages and later went on to be amended to ban s****l relationships. If mixed marriages were heard of the couple would be arrested and sent to prison, although even the sentencing was biased as 'blacks' got harsher sentences than 'whites'. At the start of the story Paulus displayed true love towards Thebedi by bringing home a painted wooden box he had made for her in wood-work classes. He had been sent away to do these classes at a boarding school. The boarding schools were another reason why 'blacks' were not as educated as 'whites' because it was just simply not given to them in the same way it was given to the 'whites'. ...read more.

This proved that she still had feelings for Paulus. In Veronica, it is not a case of racial differences; it is the fact that society dictates the way you live by your gender. Fatalism plays a big part in this story. Okeke shows that he accepted what he had been given more so than Veronica. This is shown by the fact that Okeke moves away top the city to try and make a life of his own. Whereas Veronica was not persuaded by Okeke's efforts to try and get her to come with him. Instead she stayed in the village to try and scrape a life off of very little money. Okeke proved to be moralistic, 'all the women I meet are only interested in money and cars'. Veronica herself had to mature a lot quicker than any other adolescent as her father was a bitter drunk and her mother was weak and poorly. When Okeke went away to his life in the city, I think both of them were feeling as if their lives were going to be dramatically changed but were too afraid to admit it. ...read more.

He was so seperate for her to stay he even begged her, 'I ask again, don't go away this time'. The reason his mother wanted Manak to get a different was because Guleri had never conceived a child and therefore could not continue with the family name. His mother paid 500 rupees just to get Manak another wife. This worked because after a short time of being with the second wife conceived a child. When Guleri heard the news of Manak's second wife she soaked her clothes in kerosene and set them alight. The fact you don't ever find out what the second wife's name is, tells us that she was irrelevant to Manak and that he considered her to just be there as his wife. The main reason he just put up with her is because he respected his mother and thought that it would be wrong to speak up about how he actually felt. Also this shows that Manak's mother cannot be blamed entirely because she was just acting how her culture dictates. Overall in these didactic stories, it shows the effects that different cultural forces had on people's relationships and that people had to go to extreme lengths to avoid the terror of being caught doing something they know is wrong but cannot help. Adam Thomas 10SHW ...read more.