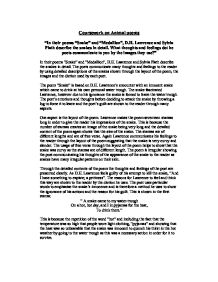 &quot;In their poems &quot;Snake&quot; and &quot;Medallion&quot;, D.H. Lawrence and Sylvia Plath describe the snakes in detail. What thoughts and feelings do the poets communicate to you by the images they use?&quot;

Therefore as the poem is written after the incident, the poet communicates his thoughts and feelings that the snake should have been treated equally as he compares it to a person. He also gives an identity to the snake on occasions to emphasise how wrong his actions were and his guilt for doing what he did. By giving the snake an identity communicates to the reader that the fact that the poet tried to murder a human which is the reason for his guilt. D.H. Lawrence also communicates his feelings and thoughts through he image he presents the reader with. Even by addressing the snake as a human being the poet still gives us a clear image of the snake. He includes body parts which a snake and human being both possess which suggests that the poet saw the snake as a being that was stereotyped. The image which D.H. Lawrence presents us with contradicts the voice of his education, "He must be killed", which has taught him to hate and kill snakes. However the snake is also said to be beautiful, "Being earth-brown, earth-golden from the burning bowels of the earth", this shows that the snake is beautiful as the poet uses alliteration. It also gives the image of the snake being long as colours mentioned created the patterns on the snake's skin. D.H. ...read more.

By comparing the snake to a medallion, Sylvia Plath is suggesting that the snake is a rare creature as medallions are difficult to find. She shows the snake being of a unique kind, "going under the chainmail", this gives the image that the snake's skin is separated like under laid rugs. The poet's thoughts and feelings are shown through the layout of the poem. This is because the poem the poem can be divided into two sections. The first four stanzas including the first line of the fifth stanza gives a description of the snake's beauty in majority to the rest of the poem. Through the layout Sylvia Plath is communicating that although the snake was beautiful, it has now lost its beauty as it starts to decompose, "the way the sun ruins a trout", by comparing the snake to a trout. Plath communicates her thoughts and feelings towards the snake clearly by the content and diction she uses. " Knifelike, he was chaste enough, pure death's metal. The yardman's flung brick perfected his laugh", this is because she clearly shows her thoughts, as she believes that the brick that hit the snake made it look as if it was laughing. As she does not include research about why the snake was killed which communicates to us her thoughts and feelings that the snake was therefore wrongly killed. As describing the snake to be dead and having maggots in the snake's stomach suggests that a creature which once had beauty was destroyed for the wrong reason. ...read more.