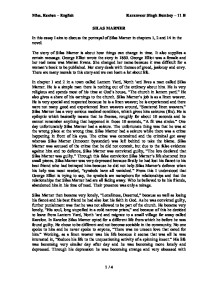 In this essay I aim to discuss the portrayal of Silas Marner in chapters 1, 2 and 14 in the novel.

SILAS MARNER In this essay I aim to discuss the portrayal of Silas Marner in chapters 1, 2 and 14 in the novel. The story of Silas Marner is about how things can change in time. It also supplies a certain message. George Elliot wrote the story in 1860. George Elliot was a female and her real name was Marian Evans. She changed her name because it was difficult for a woman's book to be published. Her story deals with themes of greed, jealousy and envy. There are many morals to this story and we can learn a lot about life. In chapter 1 and 2 in a town called Lantern Yard, North 'ard lives a man called Silas Marner. He is a simple man there is nothing out of the ordinary about him. He is very religious and spends most of his time at God's house, "The church in lantern yard." He also gives a share of his earnings to the church. Silas Marner's job is as a linen weaver. He is very special and respected because he is a linen weaver; he is experienced and there were not many good and experienced linen weavers around, "Scattered linen weavers." Silas Marner has a very serious medical condition, which gives him seizures (fits). He is epileptic which basically means that he freezes, roughly for about 10 seconds and he cannot remember anything that happened in those 10 seconds, "A fit was stroke." ...read more.

In chapter 14, the daughter of an opium addict and a very rich man was somehow shown the way to Silas Marner's house. The opium addict's mother died in Silas Marner's front garden whereas the rich father of the child was still alive, but did not accept the child because he prioritised status above relationships. Silas Marner graciously accepted the child as his own when nobody claimed the child, "She'll be my little un' said Marner, rather hastily. She'll be nobody else's." From that day forward Silas Marner was a changed man. Silas Marner with no other option had to change his whole lifestyle to revolve around this child. He also changed his main priority from money to Eppie; the child, "Now something had come to replace his hoard which gave him a growing purpose." From that day onwards Silas Marner became more sociable and was treated with respect from the Raveloe people. He was once again a strong believer of God because he thought to himself that all the bad things God did to him were for a reason because of all the happiness he was receiving now, "Since the child was sent to me... I'd have light enough to trusten by; and now she says she'll never leave me, I think I shall trusten till I die." From this I can sum up the change in character and circumstances for Silas Marner. ...read more.

In chapter 14 the chapter was made more light-hearted by Eppie's mischievous behaviour. There was a lot of direct speech between Silas Marner and Eppie as well as between Silas Marner and Dolly Winthorp, which emphasizes the fact that he had people to talk to, and people spoke to him. This reiterates the dramatic change in Silas Marner's life when he offered a home to an innocent little child. George Elliot also used techniques in her writing for certain purposes, for example George Elliot uses hyphens to make sentences longer, in shorter sentences the dramatic power of what is trying to be said would be lost, "In the days when the spinning wheels hummed busily in the farm houses - and great ladies, clothed in polished oak - there might be seen in districts far away among the lanes, or deep in the bosom of the hill's, certain pallid undersized men, who, by the side of the brawny country-folk, looked like the remnants of a disinherited race." Overall, it can be concluded that the entrance of Eppie had a life changing effect on Silas Marner. This is perceived in the manner in which the chapters vary, outlining the time before and after the entrance of a new person in Silas Marner's life. This completely altered Marner's personality; hence the language and narrative style of writing also changed to emphasis the metamorphosis. ?? ?? ?? ?? Miss. Keeton - English Karanveer Singh Bembey - 11 B 1 / 4 ...read more.