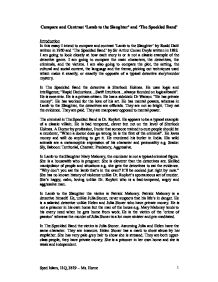 In this essay I intend to compare and contrast 'Lamb to the Slaughter' by Roald Dahl written in 1950 and 'The Speckled Band' by Sir Arthur Conan Doyle written in 1883.

Compare and Contrast 'Lamb to the Slaughter' and 'The Speckled Band' Introduction In this essay I intend to compare and contrast 'Lamb to the Slaughter' by Roald Dahl written in 1950 and 'The Speckled Band' by Sir Arthur Conan Doyle written in 1883. I am going to look closely at how each story is or is not a classic example of the detective genre. I am going to compare the main characters, the detectives, the criminals, and the victims. I am also going to compare the plot, the setting, the cultural and social context, the language and the theme, picking out techniques used which make it exactly, or exactly the opposite of a typical detective story/murder mystery. In The Speckled Band the detective is Sherlock Holmes. He uses logic and intelligence; "Rapid Deductions...Swift Intuitions...always founded on logical basis". He is eccentric. He is a private citizen. He has a sidekick: Dr Watson. "He has private money". He has worked for the love of his art. He has mental powers, whereas in Lamb to the Slaughter, the detectives are officials. They are not so bright. They eat the evidence. They are paid. They are manpower opposed to mental power. ...read more.

In Lamb to the Slaughter the underlying message is that crime does not pay whereas in The Speckled Band crime does pay. In Lamb to the Slaughter the criminal is not necessarily evil, it is a crime of passion; she loses control of her emotions. She loses control of herself. She is not responsible of her crime, whereas Dr. Roylott's murder is premeditated. He plans it very carefully e.g. he gets builders to make a hole in Helen Stoner's room so she moves to her sisters room where the bed is nailed to the floor near a ventilator so the snake he uses can drop on the bed and bite the victim when they are asleep. The main ingredient of a detective story is that the villain is caught and justice is achieved. This happens in 'The Speckled Band', with the poetic justice of Dr Roylott's death, but in 'Lamb to the Slaughter' it doesn't, and the villain gets off "scot-free". Even if they had found her out, they wouldn't have any evidence. The main ingredient is missing in 'Lamb to the Slaughter', but even so, that doesn't make the story any worse. In writing this essay I have learned that these two are very different from each other for many reasons, the first being that because they were written in two different centuries. 1 Syed Islam, 11Q, 3819 - Ms. Horne ...read more.