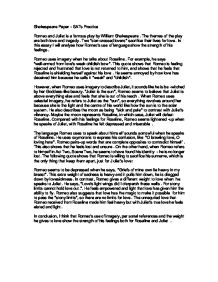 In this essay I will analyse how Romeo's use of language show the strength of his feelings.

Shakespeare Paper - SATs Practice Romeo and Juliet is a famous play by William Shakespeare. The themes of the play are both love and tragedy. Two "star-crossed lovers" sacrifice their lives for love. In this essay I will analyse how Romeo's use of language show the strength of his feelings. Romeo uses imagery when he talks about Rosaline. For example, he says "well-armed from love's weak childish bow". This quote shows that Romeo is feeling rejected and frustrated that love is not returned to him, and shows that he feels that Rosaline is shielding herself against his love. ...read more.

He also describes the moon as being "sick and pale" to contrast with Juliet's vibrancy. Maybe the moon represents Rosaline, in which case, Juliet will defeat Rosaline. Compared with his feelings for Rosaline, Romeo seems lightened-up when he speaks of Juliet, with Rosaline he felt depressed and miserable. The language Romeo uses to speak about himself sounds sorrowful when he speaks of Rosaline. He uses oxymorons to express his confusion, like "O brawling love, O loving hate". Romeo pairs-up words that are complete opposites to contradict himself. This also shows that he feels lost and unsure. ...read more.

This extra weight of sadness is heavy and it pulls him down, he is dragged down by lovesickness. In contrast, Romeo gives a different weight to love when he speaks to Juliet. He says, "Love's light wings did I o'erperch these walls. For stony limits cannot hold love out.". He feels empowered and light that love has given him the ability to fly. Romeo also suggests that love has the magic to make it possible for him to pass the "stony limits", so there are no limits for love. The unrequited love that Romeo received from Rosaline made him feel heavy but with Juliet's true love he feels elated and light. ...read more.