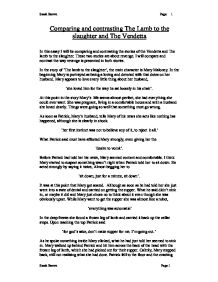 In this essay I will be comparing and contrasting the stories of the Vendetta and The lamb to the slaughter. These two stories are about revenge. I will compare and contrast the way revenge is presented in both stories

Comparing and contrasting The Lamb to the slaughter and The Vendetta In this essay I will be comparing and contrasting the stories of the Vendetta and The lamb to the slaughter. These two stories are about revenge. I will compare and contrast the way revenge is presented in both stories. In the story of 'The lamb to the slaughter', the main character is Mary Maloney. In the beginning Mary is portrayed as being a loving and devoted wife that dotes on her husband. Mary appears to love every little thing about her husband, 'she loved him for the way he sat loosely in his chair'. At this point in the story Mary's life seems almost perfect, she had everything she could ever want. She was pregnant, living in a comfortable house and with a husband she loved dearly. Things were going so well that something must go wrong. As soon as Patrick, Mary's husband, tells Mary of his news she acts like nothing has happened, although she is clearly in shock. 'her first instinct was not to believe any of it, to reject it all.' ...read more.

The Widow Saverini is first presented to us as a poor old woman that loves her son, she lives alone with him and their dog. We know she is poor as the text says 'alone with her son in a poor little house'. When Antoine Saverini, the widow's son was murdered, his body was taken back to the widow. This would make us feel sympathetic towards the widow as she has to see the b****y body of her dead child. The widow is clearly extremely distressed over Antoine's death and swears revenge on his killer. When the widow first saw the lifeless body of her son, she didn't even cry which gives us the impression she was in deep shock. She must have felt great pain over Antoine's death and she locks herself, and the dog, into the house with Antoine's body. Once locked in she broke down and 'wept great silent tears'. We are told later on in the story that the widow is religious, as she goes to church and prays. I believe that this is why she swore revenge. As some religious people believe that the only way the soul can rest is if the death is avenged. ...read more.

We get the impression that Patrick told Mary he was leaving her. If this was the case then both Mary and the Widow turned to murder because they had lost someone they loved. Both revenges are different. Mary's revenge is spontaneous, but the Widows is planned out perfectly. Mary's revenge seems to be the perfect crime, whereas the Widow has a few flaws in her plan, such as many people knowing she had a motive and also the fact many people saw her, even if dressed as an old man. Although it doesn't matter as much that the Widows crime had a few flaws because she didn't seem to care as much if she was caught as she was old and felt that she had nothing left to live for now her son had gone, whereas Mary was expecting her first child. The revenge I preferred was Mary's. The crime was so perfect and I admire her intelligence and acting skills. In my opinion the Widow was to cold blooded whereas I can understand Mary's motives more. I loved the way Mary acted around the police, even convincing them to eat the murder weapon whilst they were supposed to be searching for it. ?? ?? ?? ?? Sarah Brown Page: Sarah Brown Page: ...read more.