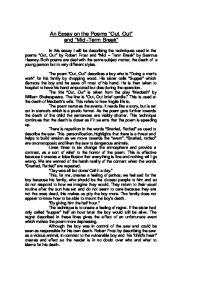 In this essay I will be describing the techniques used in the poems &quot;Out, Out&quot; by Robert Frost and &quot;Mid - Term Break&quot; by Seamus Heaney.

An Essay on the Poems "Out, Out" and "Mid -Term Break" In this essay I will be describing the techniques used in the poems "Out, Out" by Robert Frost and "Mid - Term Break" by Seamus Heaney. Both poems are deal with the same subject matter, the death of a young person but in very different styles. The poem "Out, Out" describes a boy who is "Doing a man's work" for his family by chopping wood. His sister calls "Supper" which distracts the boy and he saws off most of his hand. He is then taken to hospital to have his hand amputated but dies during the operation. The title "Out, Out" is taken from the play "Macbeth" by William Shakespeare. The line is "Out, Out brief candle." This is used at the death of Macbeth's wife. This refers to how fragile life is. The poem narrates the events. It reads like a story, but is set out in stanza's which is a poetic format. As the poem gets further towards the death of the child the sentences are visibly shorter. This technique continues that the death is closer as if it seems that the poem is speeding up. There is repetition in the words "Snarled, Rattled" as used to describe the saw. This personification, highlights that there is a threat and helps to build tension as we move towards the "event". "Snarled, rattled" are onomatopoeic and liken the saw to dangerous animals. ...read more.

The metaphor "Dark of ether" gives a mystical quality as it is the gas which makes you unconscious which is the nearest state to death. The effect of the short sentences creates an illusion that the tempo of the poem is getting quicker because death is imminent. The pattern in which the poem ends differs to the rest of "Out, Out" as it becomes irregular. The writer does this to depict uncertainty around the boy's decease. "No more to build on there." This sentence is placed after the boy's death to confirm that all of his hopes and dreams are wasted. The poem "Mid - term Break" by Seamus Heaney is about someone's younger brother, who was hit by a car and has died. We find out at the end of the poem, that the boy was four years old. The majority of the poem is about the family mourning. "Mid - term Break" is a clever title, used because a term is a period in school in which you have a holiday at the end. There is no such school holiday as "Mid - term Break" and so illustrates that the break should not have occurred. It also highlights the power of death which does not wait for rules such as "term times". The first stanza is telling us that the boy is away from home, isolated, upset and waiting. It is made up of short sentences to build up tension and create shock. ...read more.