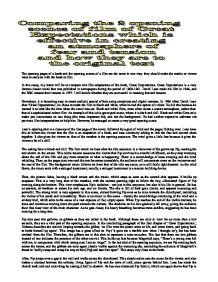 In this essay, my intent will be to compare two film adaptations of the book, Great Expectations. Great Expectations is a very famous classic novel that was published in newspapers during the period of 1860-1861.

The opening pages of a book and the opening scenes of a film are the same in one way: they should make the reader or viewer want to carry on with the book or film. In this essay, my intent will be to compare two film adaptations of the book, Great Expectations. Great Expectations is a very famous classic novel that was published in newspapers during the period of 1860-1861. David Lean made his film in 1946, and the BBC created their version in 1997. I will decide whether they are successful in creating fear and tension. Nowadays, it is becoming easy to create realistic special effects using computers and digital cameras. In 1946 when David Lean shot 'Great Expectations', he chose to make the film in black and white, when he had the option of colour. He did this because he wanted it to look like the time when the novel was set. Black and white films, more often create a scarier atmosphere, rather than that of a sophisticated colour film. An example of this is his graveyard scene, where it is dark and dull. Black and white films only make you concentrate on one thing (the most important bit), and not the background. He had neither expensive software nor previous film interpretations to help him. However, he managed to create a very good opening scene. Lean's opening shot is a close-up of the first page of the novel, followed by a gust of wind and the pages flicking over. Lean does this to inform the viewer that the film is an adaptation of a book, and uses continuity editing to link the first and second shots together. It also gives the viewer an idea of the weather in the opening sequence. The wind gives a little fear because it gives the viewer a bit of a chill. The setting here is bleak and dull. ...read more.

The close close-up of Magwitch shows him eating hastily, almost feverishly, as if he hasn't eaten for days. This makes him appear more vulnerable, and the audience may start to wonder if he is threatening Pip because it is his nature, or simply because he is a desperate man. The second of these points is when Magwitch asks Pip where his mother is, and Pip points towards the gravestone. Magwitch obviously thinks that Pip's mother is alive, and turns round and starts to run away. The fact that a grown man, especially a hardened criminal, is afraid of a woman, may have seemed quite ridiculous, and this glimpse of fear on Magwitch's part may make them less afraid of him. In the BBC version, the first thing that happens is the sound of wind, and nothing else. The setting is more original. This is because it is sunny and less dark. The setting in a Norfolk reed is unusual. This relaxes the reader, as no one would expect a convict in a cornfield. Also the reeds relax the reader. In the first scene, Pip runs in the Norfolk reed. The camera moves quickly and this alarms the audience, as we do not have time to see clearly why or where Pip is running to. It creates tension because if he is running and there is heavy breathing, there probably is someone else there. Another possibility is that he has been running for a long time, possibly from something. We cannot see Pip, but we can hear his heavy breathing, and the camera moves forward jerkily, as if we are looking at the scene through Pip's eyes. This is known as a 'point-of-view-shot', and is very effective, as we cannot see who or what Pip is running from. Then, slow motion is then used. This shows a great detail of the surroundings and also to create suspense, and frustration in the audience, as we want Pip to run faster to escape this thing, which he is running from. ...read more.

In the BBC version as well as the Lean version, Magwitch is shown to be incredibly daunting and intimidating. In the BBC version, the close-up shot is used to show what he is thinking and we can see anger in his eyes. Although no dialogue is spoken we can see from his fixed stare on Pip and his angry scowl that he intends to do harm to him, otherwise he would have had no other reason to chase him. Magwitch is dressed in old clothes and looks like he hasn't had a shave or a haircut in months and this adds to the reasoning that he is an escaped convict. In conclusion, I think that Lean and the BBC director of this film have both combined camera angles and shots with use of sound effects and light to create an effective atmosphere of suspense and fear in this opening sequence. I think that the David Lean version is more true to the book because it is in first person and it has narration. The BBC version does not follow in chronological order as we only saw what happened in a dream of Pip. However, this does create a great deal of fear and tension because we can work out that Pip must be traumatised and could not stop thinking about it incident with Magwitch. In the Lean version, some of the techniques used, such as the point-of-view shot of the knot in the tree, are very innovative and, probably, quite unusual for such an old film. A modern audience, particularly a younger one, might not be so moved by this film, as nowadays we are constantly being bombarded with special effects and computer graphics, but an audience in that time would certainly have been captivated from the moment the film began. The BBC version is more for a modern audience. This is because it is in colour, and not too many people like black/white films if they have the option of colour. Also, they are spoiled with digital effects, and state of the art technology helps any to give it that extra enhancement. ...read more.