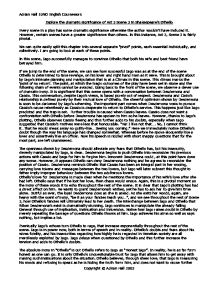 In this scene, Iago successfully manages to convince Othello that both his wife and best friend have betrayed him.

Every scene in a play has some dramatic significance otherwise the author wouldn't have included it. However, certain scenes have a greater significance than others. In this instance, Act 3, Scene 3 is fairly pivotal. We can quite easily split this chapter into several separate "pivot" points, each essential individually, and collectively. I am going to look at each of these points. In this scene, Iago successfully manages to convince Othello that both his wife and best friend have betrayed him. If we jump to the end of the scene, we can see how successful Iago was as at the end of the scene Othello is determined to take revenge, on his lover and right hand man as it were. This is brought about by Iago's intricate planning and manipulation that is at a Climax in this scene. This climax marks the 'point of no return'. The point, at which the tragic outcomes of the play have been set in stone and the following chain of events cannot be avoided. Going back to the front of the scene, we observe a clever use of dramatic irony. It is significant that this scene opens with a conversation between Desdemona and Cassio. This conversation, despite Iago's views, is based purely out of respect. Desdemona and Casio's relationship is defined purely by their mutual love of Othello. The cheerful optimism shown by Desdemona is soon to be darkened by Iago's scheming. ...read more.

Iago is no longer being implicit as Othello as already taken the bait and, sensing he is susceptible to doubt he reveals his 'fairs'. Iago suggests to Othello that he is only making these accusations out of duty and love for him. This combined with his earlier hesitancy implies what he has to say, has some truth in it. Iago's skilful delaying tactics have therefore laid the way for the false accusations and sensing Othello is vulnerable, Iago speaks 'with franker spirit' and eventually shifts vague generalisations to specific revelations. To protect his position, Iago says that he only has suspicions and no hard evidence. Despite this lack of evidence, he still cunningly convinces Othello to observe Desdemona's behaviour and actions when she is with Cassio. Iago, throughout the next section continues to tackle Othello's weakness. He knows Othello is not comfortable with his position in Venetian society, that he is insecure in the manners and customs of the court and that he constantly seeks reassurance that he is, indeed, worthy to be part of such a society. Iago implies that Desdemona's disloyalty is a common feature of Venetian society and Othello, inexperience in these matters is once again inclined to accept Iago's word. Iago also reminds Othello that Desdemona has broken a bond before with ease - that with her own father - and so is likely to break a bond with her husband with the same ease. ...read more.

While he did not know of his wife's indiscretion it did not hurt him, but now that he does know he feels that he has been robbed and can no longer function in his role as a solider. The dramatic significance arises when it appears Iago, for the first time in the play has lost control of the situation. His intention to awaken a violent jealousy in Othello has clearly worked, but at this point in the play, much of Othello's anger is directed towards Iago. In his utter rage, Othello calls Iago a "villain" and threatens that if his accusations prove slanderous, he will pay dearly. Othello asks for "ocular proof" before he will believe his wife's wrong doing. This critical moment in the play is full of dramatic tension. Othello touches on the truth: "If thou dost slander her, and torture me" and threatens Iago with death. Othello's anger is almost uncontrollable, similar to tragic hero's in other plays, such as King Lear. Iago's terrified speech is reduced to a series of short statements and rhetorical questions as Othello rages. Iago, at this decisive stage in the play responds with fury. His exclamations are forceful and he repents that he has been honest only to be repaid with mistrust and threats - the irony is rich, yet his outburst on lines 379-386 appear to curb Othello's anger, and once again Iago has control of the situation. The crudities of Iago's speech from lines 400-415, such as graphic references to s****l intercourse are effective in debilitating Othello. ...read more.