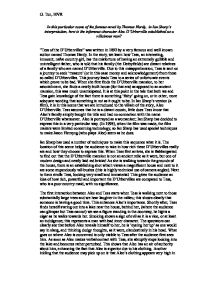 In this sequence, how is Alec D'Urberville made to seem like a villain?

In this particular scene of the famous novel by Thomas Hardy, in Ian Sharp's interpretation, how is the infamous character Alec D'Urberville established as a villainous man? "Tess of the D'Urbervilles" was written in 1892 by a very famous and well known author named Thomas Hardy. In the story, we learn how Tess, an interesting, innocent, na�ve country girl, has the misfortune of having an extremely gullible and unintelligent father, who is told that his family (the Derbyfields) are distant relatives of a family who are named D'Urberville. Due to this misapprehension, Tess is sent on a journey to seek 'treasure' (or in this case money and acknowledgement) from these so called D'Urbervilles. This journey leads Tess to a series of unfortunate events which prove to be bad. When she first finds the D'Urberville mansion, to her astonishment, she finds a newly built house (for that era) as apposed to an ancient mansion, this was much unanticipated. It is at this point in the tale that both we and Tess gain knowledge of the fact there is something 'fishy' going on, or in other, more adequate wording that something is not as it ought to be. In Ian Sharp's version (a film), it is in this scene that we are introduced to the villain of the story, Alec D'Urberville. ...read more.

After Tess explains her presence, little does she know that Alec's family only bought the name and had no association at all (as was previously mentioned). When Tess suggests that she might leave, Alec is very quick to think of reasons or excuses to influence her to stay a while longer. He gives her reasons to stay and convinces her to let him show her around the grounds to 'pass the time' for a while. During this conversation between them, the camera is shown from underneath, to give Alec a height advantage. This works considerably well seeing as Jason Flemyng is a rather tall actor anyhow. In the jargon of film makers, this shot would be known as a low angle shot, (this works for short actors such as Tom Cruise). The height difference between them gives Alec stature and importance, which both shows his superiority and makes him look handsome. As they start to walk off, he says, 'I really hope there's something I can do to help...', again forcing Tess to feel obliged to him. When all we can hear is the faint, distant sound of their voices, and all we can see is the two of them walking some way into the colossal garden, a maid walks past smirking, this implies that she has had experience with Alec and knows that he's just off to attempt to seduce another woman. ...read more.

Furthermore, the overall impression very cleverly created by Jason Flemyng, directed by Ian Sharp, would be that he is very intelligent but tends to use it for some of the wrong reasons, such as tricking Tess (and evidently other victimised maids) into giving him what he wants, generally at their expense or displeasure, especially in this case. Tess would seem to have a considerable misfortune in having met Alec after no experience of any men whatsoever. It would seem that Tess had landed herself in a trap, as it were, which she only knew she was in after it was too late. The general idea is that Tess finds Alec very attractive, but exceptionally obtrusive. This is all expressed in the way Alec strolls around very confidently, while Tess appears to feel uneasy or uncomfortable, as one would, considering the situation and circumstances. Alec has taken advantage of Tess's vulnerability, innocence and simplicity and used them to his own benefit; these are the actions of a man who needs more to do with his spare time. Moreover, to sum up the character of Alec in just few words, he has been portrayed as someone who takes advantages, is obtrusive, has experience with a number of supposedly innocent maids, is a villainous ladies' man and has extreme worldliness, talent and power which he uses for what could be referred to as the wrong reasons. ?? ?? ?? ?? G. Tun, 10VR ...read more.