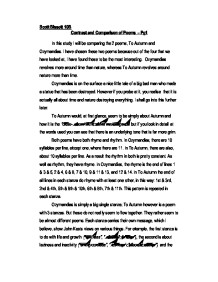 In this study I will be comparing the 2 poems, To Autumn and Ozymandias. I have chosen these two poems because out of the four that we have looked at, I have found these to be the most interesting.

Scott Bissett 10B Contrast and Comparison of Poems - Pg1 In this study I will be comparing the 2 poems, To Autumn and Ozymandias. I have chosen these two poems because out of the four that we have looked at, I have found these to be the most interesting. Ozymandias revolves more around time than nature, whereas To Autumn revolves around nature more than time. Ozymandias is on the surface a nice little tale of a big bad man who made a statue that has been destroyed. However if you probe at it, you realise that it is actually all about time and nature destroying everything. I shall go into this further later. To Autumn would, at first glance, seem to be simply about Autumn and how it is the "close-bosom friend of the maturing sun" but if you look in detail at the words used you can see that there is an underlying tone that is far more grim. Both poems have both rhyme and rhythm. In Ozymandias, there are 10 syllables per line, except one, where there are 11. In To Autumn, there are also, about 10 syllables per line. As a result the rhythm in both is pretty constant. As well as rhythm, they have rhyme. In Ozymandias, the rhyme is the end of lines 1 & 3 & 5, 2 & 4, 6 & 8, 7 & 10, 9 & 11 & 13, and 12 & 14. ...read more.

In comparison to this, in Ozymandias, Percy Shelley's views on time are very clear. He is showing that time is an all powerful, and very destructive force. No one thing can stand up to it. Ozymandias, a tyrant ("sneer", "mocked", "stone") who forced his subjects to create a statue of himself. He wanted it to last forever, along with his "mighty" kingdom. But it could not stand up to the test of time. His views on nature are to me very similar to his views on time. Nature is both Creator and yet Destroyer. Although I am not sure whether or not this is Shelley's view on death, I can see that in death Ozymandias looks extremely foolish, because he has said that you should "Look on my works, ye Mighty, and despair" yet all behind his broken statue is "level sands", so everything he had achieved in his lifetime has been wasted. There is loads of imagery in To Autumn, much of which I have mentioned when saying how Keats' views on life, death, and time have been conveyed. The tone of the Scott Bissett 10B Contrast and Comparison of Poems - Pg3 first stanza is of joy, peace, happiness, and growth. This is produced by references to lots of natural living things ("fruit", "flowers", "bees"). ...read more.

Ozymandias on the other hand has none. However, other poetic tools, such as onomatopoeias, are not lacking from either poem. This is inconclusive, as it is hard to write without using them. To Autumn often rearranges it words to make it fit in with the rhythm ("with fruit the vines round the that-eves run", "to bend with apples the moss'd covered trees", "to set budding more"). Ozymandias doesn't do this. After comparing many points in both poems, I have come to the conclusion that these two poems don't have very much in common. For example, Ozymandias talks more about the strength of time, whereas To Autumn talks about how Nature, and in particular, Autumn are forces that provide much in the world. If you are someone who doesn't class a poem as a poem unless it has rhyme, rhythm, poetic language, sound patterns etc, then you are far more likely to prefer To Autumn, because it is much more the poet's poem than Ozymandias. I personally prefer Ozymandias, because it has great power. Although it doesn't have much in the ways of standard poetic tools, it does have rhyme and rhythm, as well as a deep and strong message. Self-Criticism - Not enough actual comparison, too much just talking about the poem. - Used the words 'think' and 'believe' to often - It doesn't read well, it jaws, I have obviously just looked at what to write and written about it just like that. ...read more.