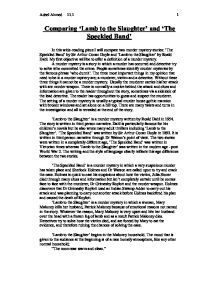 In this wide-reading piece I will compare two murder mystery stories: 'The Speckled Band' by Sir Arthur Conan Doyle and 'Lamb to the Slaughter' by Roald Dahl. My first objective will be to offer a definition of a murder mystery.

Even though Noonan checks Mary Maloney's alibi, he never really suspects her, and makes too many false assumptions, whereas Holmes looks at everything for every aspect before jumping to conclusions. Doyle uses his detective, Sherlock Holmes to convey the attitudes at the time in which he wrote 'The Speckled Band'. Life in Victorian times was full of murder, drugs and prostitution. Public hangings were frequent and people feared crime greatly. When Holmes arrived on the scene, the public fell in love with how he always cracked every case and defeated evil. Holmes reassured the people that he would always solve the case, even though he was a fictional character. Doyle uses his detective superbly to show the attitudes at the time of writing. The settings between the two stories also contrast one another. In 'The Speckled Band' the crime and action is set at the Roylotts' manor house at Stoke Moran. Stoke Moran is described as a stereotypical murder house, high on a hill top, desolated from all other settlements, broken windows and "heavy iron gates" with "iron bars". The reader immediately feels that the manor is somewhat eerie and suspicious. The manor's two curving wings are described as "claws of a crab". The intended effect of this is to make the reader feel that the manor house is very dangerous and anyone entering its claws will find it difficult to escape. This is an example of pathetic fallacy used by Doyle to give the setting a sense of emotion, as in the angry and vicious claws of a crab, to the manor house. The pathetic fallacy used in the setting reflects the emotions and personality of Dr Roylott. This gothic setting adds to the suspense created and adds to the fact that evil looms, making Dr Grimesby Roylott even more guilty of the murder. 'Lamb to the Slaughter' is set in a modern cosy home with a small garden and garage. ...read more.

In 'The Speckled Band' Doyle describes objects and characters in great detail with long, complex sentence structures. For example when we first meet the villain, Dr Grimesby Roylott, Doyle describes his appearance with great detail from head to toe, using dense sentences with metaphors and similes; "His deep-set, bile-shot eyes and the thin fleshless nose gave him somewhat the resemblance to a fierce old bird of prey." In Victorian times people enjoyed literate pieces with intellectual use of language, especially that of Sherlock Holmes. 'Lamb to the Slaughter' also uses good use of descriptive writing, although not in as much detail as 'The Speckled Band'. Dahl also uses similes in his story, using examples of modern references which give evidence of the age difference between the two stories. An example of this sort of simile is found near the beginning; "She loved to luxuriate in the presence of this man, and to feel - almost as a sunbather feels the sun." The lengths of the sentences in 'Lamb to the Slaughter are on average shorter than the sentences of 'The Speckled Band' and they are detailed with less density, with a lot of quick, short sentences between the characters , especially near the beginning in the conversation between Patrick and Mary Maloney. 'The Speckled Band' is a serious affair all the way through the story whereas Dahl's story uses faint humour in places although it is not intended to be a comedy. An example of humour in the story is when Mary hits the lamb of leg over Patrick's head; "She stepped back a pace, waiting, and the funny thing was that he remained standing there for at least four or five seconds, gently swaying. Then he crashed to the carpet." This is something you would expect in a 'Tom and Jerry' cartoon, not a murder mystery. Quotes like this throughout 'Lamb to the Slaughter' show the audience that the story is not meant to be taken very seriously and the tone of the general text also reflects this. ...read more.