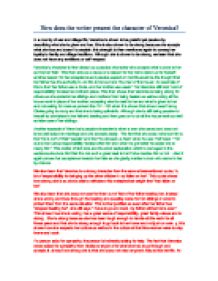 In &quot;Veronica&quot; how does the writer present the character of Veronica?

How does the writer present the character of Veronica? In a country of war and village life, Veronica is shown to be grateful yet passive by describing what she is given and has. She is also shown to be strong because she accepts what she has and doesn't complain, this strength is then mentioned again to convey her loyalty to family and village traditions. Although she is shown to be strong, we learn that she does not have any ambitions or self-respect. Veronica's character is first viewed as a passive character who accepts what is done to her as it is her 'fate'. This then acts as a cause or a reason for her not to stand up for herself; another reason for her acceptance and passive aspect on her life would be the thought that her father has the authority to do this to her as he is 'the man of the house.' An example of this is that 'her father was a brute, and her mother was weak." Yet Veronica still took "a lot of responsibility" to take her mother's place. ...read more.

An example of this is when she clearly says "don't be sorry for me". This not only shows that she is strong but also shows how optimistic and grateful she is when she then says "we are managing. God has blessed us with a son. Is that not enough?" The fact that she considers her new born son a blessing clearly also shows her great family values and love for her son even in times when she lives in the "same hut" since her childhood and is "squatting" as she does not even have a lot of furniture. Someone else in her position might consider the son as a curse in the same position as they know they would not be able to care for it, feed it or treat it as they would like to, but Veronica is not like that, but far better. Another example of her strength is when Okeke thinks he "saw tears in her eyes as she turned to go". This shows she is strong by the fact that she didn't want to show Okeke she is crying and didn't want him to mistake it for a sign of weakness so before she burst into tears, she "turned to go" so no one sees her in such a position. ...read more.

This again can be proven when she declines Okeke's offer to leave and the she "leaves that to others" and that she admits that "my place is here" in the village which could be because she has no education and that she believes she is not fit to learn. Thus is can be assumed that Veronica does not really care for the better life and has no ambitions and that she is content with the life she is living despite her troubling past. This is again linked to how she is passive and yet strong. In conclusion Veronica's character is shown to be complicated in the aspect that she is passive yet strong and optimistic as when she does not care what happens to her and that she is not envious of Okeke's better life. This then also links to how she has no ambitions and has low self-esteem when she declines the offer of leaving the village which in other aspects can be seen as her facing her horrible past again showing her strong character. Veronica's is also viewed as strong as she holds on to her tradition and accepts her death with a smile. Thus Veronica is viewed as a strong character in other aspects besides herself where she becomes passive and unambitious, giving her a complicated character. ...read more.