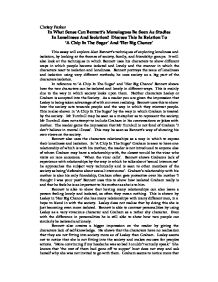 In What Sense Can Bennett's Monologues Be Seen As Studies In Loneliness And Isolation? Discuss This In Relation To 'A Chip In The Sugar' And 'Her Big Chance'

Christy Parker In What Sense Can Bennett's Monologues Be Seen As Studies In Loneliness And Isolation? Discuss This In Relation To 'A Chip In The Sugar' And 'Her Big Chance' This essay will explore Alan Bennett's techniques of exploring loneliness and isolation, by looking at the themes of society, family, and friendship groups. It will also look at the techniques in which Bennett uses his characters to show different ways in which people become isolated and lonely and the manner in which the characters react to isolation and loneliness. Bennett portrays the issue of loneliness and isolation using very different methods; he uses society as a big part of the characters isolation. In reference to 'A Chip In The Sugar' and 'Her Big Chance' Bennett shows how the two characters can be isolated and lonely in different ways. This is mainly due to the way in which society looks upon them. Neither characters Lesley or Graham is accepted into the Society. ...read more.

Bennett is able to show that having many relationships can also leave a person feeling lonely and isolated, as often they mean nothing. This is shown by Lesley in 'Her Big Chance' she has many relationships with many different men, in a hope to blend in with the society. Lesley does not realise that by doing this she is just becoming even more isolated. Bennett is able to contrast personalities by using Lesley as a very vivacious character and Graham as a rather shy character. Even with the difference in personalities he is still able to show how two people can similarly be isolated and lonely. Bennett also creates a bigger impression on the reader by giving the characters lack of self-knowledge. He shows that the characters have no realisation that they are not fitting into society more so of Lesley than Graham. Lesley seems not to notice that she is not fitting into the society and makes excuses for peoples actions. ...read more.

Although at the same time she uses colloquial language 'ciao, Simon' this shows how Lesley acts very false towards people. This also draws her away from society, she does this as she often reads self-help books 'the drill for saying goodbye is' this too shows how Lesley is insecure caused by her isolation and loneliness. Bennett creates a great sense of insecurity with his character Graham 'I didn't say anything' this is repeated throughout the text, showing that Graham is unable to stand up for himself when others put him down, this makes progressively more isolated. There is a sense of irony used by Bennett in 'Her Big Chance' gives the audience the impression that Lesley is talking about giving her body 'Acting is really just giving'. Also in 'Her Big Chance' Bennett uses imagery 'then I saw the cat sitting there watching the trout' this gives the image of the way in which people are towards her. Bennett uses all these things to give his characters their own degrees of loneliness and isolation. ...read more.