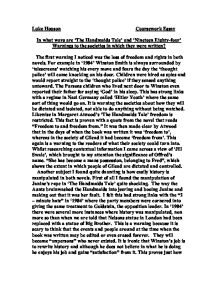 In what ways are 'The Handmaids Tale' and 'Nineteen Eighty-four' Warnings to the societies in which they were written?

Luke Hopson Coursework Essay In what ways are 'The Handmaids Tale' and 'Nineteen Eighty-four' Warnings to the societies in which they were written? The first warning I noticed was the loss of freedom and rights in both novels. For example in '1984' Winston Smith is always surrounded by 'telescreens' watching his every move and fears the day the 'thought police' will come knocking on his door. Children were hired as spies and would report straight to the 'thought police' if they sensed anything untoward. The Parsons children who lived next door to Winston even reported their father for saying 'God' in his sleep. This has strong links with a regime in n**i Germany called 'Hitler Youth' where the same sort of thing would go on. It is warning the societies about how they will be dictated and isolated, not able to do anything without being watched. Likewise in Margaret Atwood's 'The Handmaids Tale' freedom is restricted. This fact is proven with a quote from the novel that reads "Freedom to and freedom from." It was then made clear by Atwood that in the days of when the book was written it was 'freedom to', whereas in the society of Gilead it had become 'freedom from'. ...read more.

Despite all this manipulation of history in the novels, there are also contrasting elements. For instance in the 'Handmaids Tale', the Handmaids' life style, morals and clothing is very similar to that of the Puritans, a Catholic group from the 17th century who had strong beliefs and strict rules. This talk of Religion leads me nicely on to how Religion is used as a Warning in the novels. In 'The Handmaids Tale', Religion or more specifically the Bible is taken far to seriously and literally. For instance they base their whole rules and regulations around the story of Rachael and Jacob in the Old Testament (Genesis 30 v1-3). Ironically the Bible later contradicts itself later on, but they stick solely to that single section and read it before every ceremony. Atwood also uses quotes such as "God is a Natural Resource" to shed light on the fact that religion is over rated and taken over seriously. This is definite warning to the society of the time and for generations to come. For instance this has strong links with Religious Fundamentalism that existed and still exists in some parts of America today. The idea of religious importance however, is not evident in Orwell's novel, as like a lot of things in '1984' it no longer exists. ...read more.

The same however can not be said for Atwoods novel, where feminism plays a key part. The novel even admits, "middle class women have become complacent". This is probably because they have given up, considering the harsh treatment they receive. Offreds mother warns of the dangers of this complacency when she tells her daughter, "History will absolve me". Its not only the Handmaids who get downtrodden. The wives are also much lower down the hierarchy ladder, with the Commander being the head of the household. The wives' function is to be married to the Commander and bring up the children; the house is their domain. George Orwell's main warning is written in the title of the novel, '1984'. The novel was written in 1948, which made me notice that Orwell has simply reversed the year. This title indicates a warning in itself as it suggests the frightening things that could happen just 36 years down the line, if the society carried on the way it was going. Atwood on the other hand has given her own views in an interview, since the novel was written. She said that 'The Handmaids Tale' is "a slight twist on the society we have now", which sums up exactly what her feelings and intentions were in writing the novel. To warn the society of the time. ...read more.