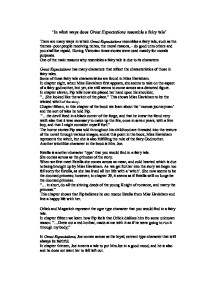 'In what ways does Great Expectations resemble s fairy tale'

'In what ways does Great Expectations resemble s fairy tale' There are many ways in which Great Expectations resembles a fairy tale, such as the themes- poor people receiving riches, the moral reasons, - do good unto others and you shall be repaid. During Victorian times stories were used mainly for morals purposes. One of the main reasons why resembles a fairy tale is due to its characters Great Expectations has many characters that reflect the characteristics of those in fairy tales. Some of these fairy tale characteristics are found in Miss Havisham. In chapter eight, when Miss Havisham first appears, she seems to take on the aspect of a fairy godmother, but yet, she still seems to come across as a distorted figure. In chapter eleven, Pip tells how she placed her hand upon his shoulder, "...She looked like the witch of the place." This shows Miss Havisham to be the wicked witch of the story. Chapter fifteen, in this chapter of the book we learn about the 'morose journeyman' and the sort of tales he told Pip. ...read more.

Joe is the type of character that will put others before himself as he is always aiming to please. Great Expectations contains many fairytale like themes, such as Pip receiving riches when he reaches a certain age. Pip believes that Miss Havisham has given his riches to him, however later on in his life he realises that they actually came from Magwitch, the escaped convict that he helped. The themes in this part of the book are the thought of a poor boy/person becoming rich and that helping others or the less fortunate you will be repaid in the future when you least expect it. Another theme in this part of the book could be the thought of there being lots of surprises and coincidences. Pip falling in love with Estella is also another theme in Great Expectations. This gives the impression that Pip has fallen in love with someone above and someone that it's almost impossible for him to get with. Miss Havisham purposely makes Pip fall in love with Estella so that she can break his heart and make him feel worthless The first impressions of Wemick and Jaggers are also a theme in Great Expectations. ...read more.

Throughout the book, we see Pip move from the sinister country his hometown where he had lived most his life, to the city, a dangerous rough and ready hard place to live in. Great Expectations shows that not all stories have a need to have a happy ending to make it a good book. Although Pip doesn't obtain what he really wanted he gains wisdom through his suffering. In the Charles Dickens book of Great Expectations, Pip and Estella do not get together and they both go their separate ways, however Dickens's friend Wilkie Collins thought that Great Expectations should have a happy ending and so he helped him to write a new version of the ending in which Pip and Estella get together. Pip and Estella also get together in the 1948 film version of Great Expectations. The ways in which I think Great Expectations resembles are fairy tale are due to, the moral, themes, characteristics and names of the characters, such as Jaggers, - hard sounding name, which fits in with his character. Conversely, there are ways in which it doesn't resemble a fairy tale, for instance the length and structure of the novel and it has been written in a more sophisticated manner than a fairy tale would be. ...read more.