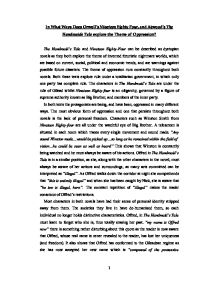 In What Ways Does Orwell's Nineteen Eighty Four, and Atwood's The Handmaids Tale explore the Theme of Oppression?

In What Ways Does Orwell's Nineteen Eighty Four, and Atwood's The Handmaids Tale explore the Theme of Oppression? The Handmaid's Tale and Nineteen Eighty-Four can be described as dystopian novels as they both explore the theme of invented futuristic nightmare worlds, which are based on current, social, political and economic trends, and are warnings against possible future disasters. The theme of oppression runs constantly throughout both novels. Both these texts explore rule under a totalitarian government, in which only one party has complete rule. The characters in The Handmaid's Tale are under the rule of Gilead whilst Nineteen Eighty-four is an oligarchy, governed by a figure of supreme authority known as Big Brother, and members of the inner party. In both texts the protagonists are being, and have been, oppressed in many different ways. The most obvious form of oppression and one that persists throughout both novels is the lack of personal freedom. Characters such as Winston Smith from Nineteen Eighty-four are all under the watchful eye of Big Brother. A telescreen is situated in each room which traces every single movement and sound made. "Any sound Winston made...would be picked up...so long as he remained within the field of vision...he could be seen as well as heard" This shows that Winston is constantly being watched and he must always be aware of his actions. Offred in The Handmaid's Tale is in a similar position, as she, along with the other characters in the novel, must always be aware of her actions and surroundings, as many acts committed can be interpreted as "illegal". As Offred walks down the corridor at night she comprehends that "this is entirely illegal" and when she has been caught by Nick, she is aware that "he too is illegal, here". The constant repetition of "illegal" makes the reader conscious of Offred's restrictions. Most characters in both novels have had their sense of personal identity stripped away from them. ...read more.

Winston must wear "blue overalls which were the uniform of the party" while O'Brien wears the "black overalls of an inner party member." Julia, Winston's secret lover, also wears "blue overalls" however she also wears "A narrow scarlet sash, emblem of the Junior Anti-s*x League" around her waist. The junior anti-s*x league is one of the many committees set up by Big Brother in order to control its subjects. "Processions, meetings, military parades, lectures, waxworks..." are just some of the many events party members indulge in, in order to express their love and devotion to Big Brother. Julia also encourages Winston to enrol for events such as "munition-work" to show his dedication to the party. Julia believed that by enrolling in such events "It paid...it was camouflage", therefore it is highly unlikely anyone will ever suspect such a zealous party member as secretly disobeying Big Brother. Phillip Pullman, one of the many critics of Orwell's novel suggests: "...if they don't stand up and wave a flag and shout slogans, they're invisible, and hence suspect" 1 Restricted speech is also common throughout The Handmaid's Tale. Characters in this novel must follow a strict and certain criterion. When attending shopping trips, Offred and Ofglen must speak using certain terminology such as "praise be" and "blessed be the fruit". Not only do these phrases show restricted speech but they also inform the reader about Gileadean societies. By using phrases such as "praise be" the reader is aware that Gilead is a (Christian) theocracy, where phrases from the Bible are used in everyday life and speech. Restricted speech also appears on Birth day, where Handmaid's are trained to repeat specific terms as a fellow a Handmaid is giving birth. "Breathe, breathe...hold, hold. Expel, expel" are chanted repeatedly. This chanting also shows loss of identity as all handmaids are now seen as one and the same person. Orwell's Nineteen Eighty Four also examines the theme of restricted speech. ...read more.

As one can see, they are equally, if not more vulnerable to men of power now, then ever before. Orwell too uses flashbacks to show the reader what Winston's life was like before the regime. "...there had never been quite enough to eat, one had never had socks or underclothes that were not full of holes" Although Winston defies the party it seems that he is almost accepting the party's rules and trying to defend their actions. This may have been a foreshadowing of Winston's fate at the end of the novel as "...he loved Big Brother" The idea of any system of government being implemented is to claim they are giving their citizens a better way of life. This is parallel to the ideas of Stalin in 1936. In fact many of Orwell's ideas are said to be based upon n**i Germany and Communist Russia. As Margaret Atwood says of Nineteen Eighty-four: "Orwell was writing a satire about Stalin's Soviet Union" 4 The ideas of the party and Big Brother are very much similar to Stalin's Russia. Russia was a communist country and therefore the citizens did not have a vote. At the time Russia was an oligarchy; as it was ruled by only a few people. The sudden arrests by the thought police were familiar features of the 1930s, especially in Soviet Russia. In 1936, the dictator Stalin held trials were victims confessed to treachery (similar to Jones, Aaronson and Rutherford), and they often claimed that they had worked for a secret movement like the brotherhood. In conclusion, after analysing both novels it is evident that the theme of Oppression runs constantly throughout. Most, if not all the characters are oppressed. Lack of personal freedom, restricted movement, restricted thought and restricted language is experienced by many characters. Oppression is not only shown through actions but by dress and economic control. Both The Handmaid's Tale and Nineteen Eighty-four are visions of the future based on events of the present and the past. ...read more.