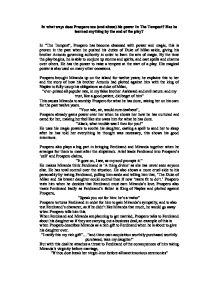 In what ways does Prospero use (and abuse) his power? Has he learned anything by the end of the play?

In what ways does Prospero use (and abuse) his power in The Tempest? Has he learned anything by the end of the play? In "The Tempest", Prospero has become obsessed with power and magic, this is proven in the past when he pushed his duties of Duke of Milan aside, giving his brother Antonio governing authority in order to learn the arts of magic. By the time the play begins, he is able to conjure up storms and spirits, and cast spells and charms over others. He has the power to raise a tempest at the start of a play. His magical power is also used on many other occasions. Prospero brought Miranda up on the island for twelve years; he explains this to her and the story of how his brother Antonio had plotted against him with the king of Naples to fully usurp his obligations as duke of Milan, "o'er- prized all popular rate, in my false brother Awkward and evil nature: and my trust, like a good patient, did beget of him" This causes Miranda to worship Prospero for what he has done, raising her on his own for the past twelve years. "Your tale, sir, would cure deafness", Prospero already gains power over her when he shows her how he has nurtured and cared for her, making her feel like she owes him for what he has done. ...read more.

In making this decision he decides on mercy rather than vengeance and declares that that he will give up his magical powers that made him inhuman and corrupted. "I'll break my staff, bury it certain fathoms in the earth," Caliban, the son of evil Sycorax, is acquired as Prospero's slave when he comes onto the island. Caliban is seen to be inhuman by Prospero. He argues that the island rightfully belonged to him and mocks the idea of Prospero being the ruler of the 'Kingdom' by telling him, "I am all the subjects that you have" As if to say to Prospero 'you're not much of a ruler if I am your only subject'. However, Prospero still decides to colonise the island and oppress Caliban. In Shakespeare's time, around 1950, explorers were still discovering parts of the globe and taking it over. An example of this is the British Empire where they were discovering parts of Africa and colonising them, they would enslave the population and take treasures and goods. Prospero's overruling of the island is another example of this, "This thing of darkness, I acknowledge mine." Prospero was once kind to Caliban before he chose to enslave him, but his reason for this is arguably justified. He once cared for Caliban until he tried to r**e Miranda. ...read more.

Enter diverse spirits in shape of dogs and hounds, hunting them about," The pain inflicted on Caliban and his party is out of proportion to the threat they really were to Prospero. This shows Prospero's abusive traits. Prospero clearly finds pleasure in imposing pain and punishment. This is caused by the fact that too much power can corrupt and bring out the worst aspects of ones character, causing them to become power obsessed and deluded. "Let them be hunted soundly" However, at the end of the play his spirit Ariel makes him realise that if he wants to remain human, he must leave his magical powers behind and return Milan a duke and a normal man and teaches him how to be human again. Ariel shows him how his magical powers have disrupted him and therefore Prospero stops teaching everyone a lesson when he learns a lesson himself that punishment and chasing power to become superior to everyone else leads to corruption and causes him to be inhuman and ruthless to others. He does not fully gain vengeance on his brother and stops punishing him when he learns to forgive him in the end showing a great change in Prospero's character from the start of the play where his intentions were to punish his brother and teach him a lesson for what he did to Prospero. To conclude the play Prospero decides to go back to Milan a normal man and relapse to ruling the country again. ...read more.