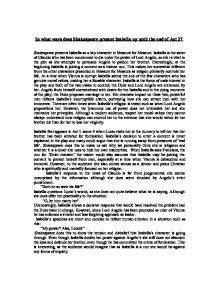 In what ways does Shakespeare present Isabella up until the end of Act 2?

In what ways does Shakespeare present Isabella up until the end of Act 2? Shakespeare presents Isabella as a key character in Measure for Measure. Isabella is the sister of Claudio who has been condemned to die under the power of Lord Angelo, so she is vital to the plot as she attempts to persuade Angelo to pardon her brother. Interestingly, at the beginning Isabella is joining a convent as a trainee nun. This makes her somewhat different from the other characters presented in Measure for Measure as religion primarily controls her life. At a time when Vienna is corrupt Isabella seems the one of the few characters who has genuine moral values, making her a likeable character. Isabella is the focus of male interest in the play and both of the two males in control; the Duke and Lord Angelo are entranced by her. Angelo finds himself overwhelmed with desire for the Isabella and in the dying moments of the play, the Duke proposes marriage to her. Her dramatic impact on these two, powerful men reflects Isabella's incorruptible charm, portraying how she can attract men with her innocence. There are often times when Isabella's religion is tested such as when Lord Angelo propositions her. However, his tyrannous use of power does not intimidate her and she maintains her principles. Although a modern audience, respect her moral values they cannot always understand how religion can control her to the extreme that she would rather let her brother die than for her to lose her virginity. Isabella first appears in Act 1 scene 4 when Lucio visits her at the nunnery to tell her that her brother has been arrested for fornication. ...read more.

Soon the audience begins to notice that Isabella is having an effect on Lord Angelo, however, it is not necessarily one of mercy and forgiveness for her brother: "She speaks, and 'tis such sense. That my sense breeds with it- Fare you well" Here Angelo speaks aside and we begin to notice how he is really feeling towards Isabella's visit. We even see that he has come to the realisation that he does not have the right to condemn her brother. This strongly illustrates how Isabella's innocence and sheer determination can have affect on other characters. The word "sense" suggests Isabella's influential argument as well as implying a s****l urge that Angelo feels for her. In her last attempt to save, her brother from execution is bribery. Instantly Angelo sees this as a s****l offer: "Ay with such gifts that heaven should hare with you" Although we do not suspect that Isabella deliberately indicates that she will bribe him with s*x, the audience may speculate that here she shows her illicit sexuality in where she purposely hints at s*x. However, we must not put past the idea that Angelo is clearly already s******y aroused and may have misunderstood her because of this. In his final soliloquy, the audience are confirmed on their speculation towards Angelo's l**t for Isabella. Interestingly he feels that he is tempted by a "cunning enemy", meaning the devil. This is unusual considering Isabella is a nun and therefore is closer to God. This makes us consider whether there is more to Isabella than first imagined and if she has the ability to tempt some one who is primarily focused on power and leadership. We wonder if Isabella is innocently tempting Angelo or whether in fact she knows the effect she has on men and she cunningly tries to use it to get her own way. ...read more.

Although we never find out which of these is Isabella's true character we do know that Isabella also goes on to tempt the Duke. Again, this could be through her innocence; however it seems rather coincidental that two men of great power fall for her entirely because of this and we are led to believe that she subconsciously flirts to get her own way. Isabella's character is rarely on her own and Shakespeare uses her to interact with other characters to allow for comparison. This is because she is so different due to her religious morals and high standards. Her character is used as a device to provide drama to the plot, as she is incredibly passionate over issues that she believes in. Shakespeare cleverly uses Isabella in the first half to set up the audience for the emotional roller coaster in the second half of the play. She has a prevailing affect on the play as a whole as she, like the Duke are able to manipulate people. It may be said that she is the focus of the play as she is the major female character that is central to the leading male characters, the Duke, Angelo and Claudio. At times, she controls all of them. This not only shows her influence on the male characters but also shows that in fact it is she who has real control over the play, not the Duke as Isabella manages to manipulate him emotionally. At the end of the play, the audience believes that the Duke has conclusively tested all the characters, and he does to a certain extent. However, it is Isabella who the reader presumes, unknowingly is the major puppeteer for the plot. Shakespeare uses the seemingly most innocent character to have the most control. ...read more.