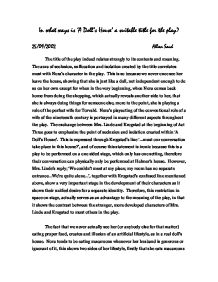 In what ways is 'A Doll's House' a suitable title for the play?

In what ways is 'A Doll's House' a suitable title for the play? 25/09/2002 Allan Saud The title of the play indeed relates strongly to its contents and meaning. The aura of seclusion, suffocation and isolation created by the title correlates most with Nora's character in the play. This is so because we never once see her leave the house, showing that she is just like a doll, not independent enough to do so on her own except for when in the very beginning, when Nora comes back home from doing the shopping, which actually reveals another side to her, that she is always doing things for someone else, more to the point, she is playing a role of the perfect wife for Torvald. Nora's playacting of the conventional role of a wife of the nineteenth century is portrayed in many different aspects throughout the play. The exchange between Mrs. Linde and Krogstad at the beginning of Act Three goes to emphasize the point of seclusion and isolation created within 'A Doll's House'. This is expressed through Krogstad's line '...must our conversation take place in this house?', and of course this statement is ironic because this is a play to be performed on a one sided stage, which only has one setting, therefore their conversation can physically only be performed at Helmer's house. ...read more.

Nora realizes towards the end of the play that she is treated by Helmer in the same paternal, patronizing manner as she was herself treated by her father and that she in turn treats her children in this same way. This is shown by how Torvald patronizingly calls Nora his 'little skylark' or 'squander-bird' and Nora then calls her children 'little baby dolls'. Nora finally comprehends this fact as being a negative aspect of her life and in fact accuses them of doing her harm in the line 'You and papa have done me a great wrong' and re-instates her understanding of the consequences towards the end of the play when she says that 'He (Nora's father) called me his little doll, and he played with me just the way I played with my dolls. Then I came her to live in your house' and 'I've been your doll-wife, just as I used to be papa's doll-child. And the children have been dolls'. Just as in a real doll's house, Nora is never shown to actually take care of the children, she just 'plays' with them once in a while when she is in the mood for it, this is shown by her line to Anne-Marie 'No, don't - I'll undress them myself, Anne-Marie. No, please let me; it's such fun'. ...read more.

'I have been performing tricks for you, Torvald. That's how I've survived. You wanted it like that. You and Papa have done me a great wrong. It's because of you I've made nothing of my life.' Nora speaks these words, which express the truth that she has gleaned about her marriage, Torvald's character, and her life in general, to Torvald at the end of Act Three. She recognizes that her life has been largely a performance. She has acted the part of the happy, childish wife for Torvald and, before that; she acted the part of the happy, childish daughter for her father. She now sees the fact that her father and Torvald compelled her to behave in such a way as a "great wrong" that stunted her development as an adult and as a human being. She has made "nothing" of her life because she has existed only to please men. Following this realization, Nora leaves Torvald in order to make something of her life and, for the first time, to exist as a person independent of other people. Though most English translations of the play are titled 'A Doll's House', some scholars believe that 'A Doll House' is a more accurate translation of the original Norwegian version. They feel that it is more suggestive of the doll-like qualities of the entire cast of characters. After all, Ibsen was trying to portray the attitudes and conventions held in every upper class household during the late 19th century, not just this one in particular. ...read more.