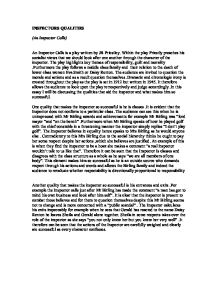 INSPECTORS QUALITIES (An Inspector Calls) An Inspector Calls is a play written by JB Priestley. Within the play Priestly preaches his socialist views that we should look after one another through the character of the inspector. The play highlights key themes of responsibility, guilt and morality .Furthermore the play follows a middle class family and their relation to the death of lower class women Eva Smith or Daisy Renton. The audience are invited to question the morals and actions and as a result question themselves .Dramatic and chronologic irony is created throughout the play as the play is set in 1912 but written in 1945. It therefore allows the audience to look upon the play retrospectively and judge accordingly .In this essay I will be discussing the qualities that aid the inspector and what makes him so successful. One quality that makes the inspector so successful is he is classes .It is evident that the Inspector does not conform to a particular class .The audience can see this when he is unimpressed with Mr Birling awards and achievements for example Mr Birling was "lord mayor "and "on the bench" .Furthermore ...read more.

It is clear that the inspector is present to combat those believes and for them to question themselves despite this Mr Birling seems not to change and is more concerned with a "public scandal" . The Inspector calculates his exits impeccably for example when he sees that Gerald has reacted to the name Daisy Renton he leaves Sheila and Gerald alone together. Sheila in some respects takes over the role of the inspector as she says "you not only knew her but you knew her very well" .It therefore can be seen that the actions of the Inspector are carefully weighed and clearly are successful as every character confesses. A further quality that the Inspector possesses is that he is persistent and blunt. He follows questions with more questions with the intention to draw a confession .For example when he questioning Arthur as to why he refused his workers a pay rise he says "why?" and then "yes ,why did you refuse?". In addition he is blunt and emotionless in his statements for example he says "you're not even sorry now, when you know what happened. ...read more.

Birling and claims she has "no hope of not discussing ".As a results of these qualities the Inspector holds power over the family hence making them confess. The inspector is mysterious he seems to be Omniscient and explains many things from Eva Smiths diary .He only allows one person to see the photograph at a time as Gerald points out "there's no proof it was the same photograph and we've no proof it was the same girl!". Despite this at the time of the incident no-one argues and all conform to the Inspectors expectation and demands. It is clear that he makes a great impression as the he says " I usually do on the young ones" . By allowing the Inspector to have this quality Priestley creates a G-D like figure and therefore commits the characters to revealing all to him. In conclusion the Inspector contains many qualities that help the characters to reveal themselves .He sets the pace and all the other characters fall in line with him. Despite being proven a fake he makes a deep and lasting impression on some of the character, infact by the end of the play Sheila seems to be a changed person. ...read more.