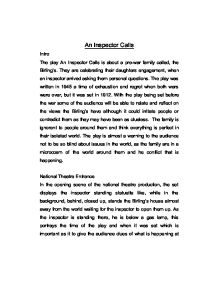 An Inspector Calls Intro The play An Inspector Calls is about a pre-war family called, the Birling's. They are celebrating their daughters engagement, when an inspector arrived asking them personal questions. The play was written in 1945 a time of exhaustion and regret when both wars were over, but it was set in 1912. With the play being set before the war some of the audience will be able to relate and reflect on the views the Birling's have although it could irritate people or contradict them as they may have been as clueless. The family is ignorant to people around them and think everything is perfect in their isolated world. The play is almost a warning to the audience not to be so blind about issues in the world, as the family are in a microcosm of the world around them and he conflict that is happening. National Theatre Entrance In the opening scene of the national theatre production, the set displays the inspector standing statuette like, while in the background, behind, closed up, stands the Birling's house almost away from the world waiting for the inspector to open them up. As the inspector is standing there, he is below a gas lamp, this portrays the time of the play and when it was set which is important as it to give the audience clues of what is happening at that time. As well as the house being in the background there is children playing which the Inspector hands them an orange. This shows the social context at the time that fruit is a luxury however was available at the time as the war had not started by then. ...read more.

However being direct like that gets a reaction of shock out of the audience and cast of almost disgust to Gerald to hurt him. Role in Community People like Gerald and Mr Birling have important in the community. Mr Birling is constantly reminding the Inspector of his status . "I'm still on the bench". Proving and boasting to the Inspector of the authority that he has. He has a role in the legal system of Brumley, as a councillor. The police come to Mr Birling to sanction warrants. There is irony underneath his role as he is there to represent right and wrong also refining the life of the community especially with his wealth helping poorer residents to improve their quality of life. However he doesn't show these qualities as he sacked Eva Smith over disputes with money. "Did she go on the streets". Mr Birling asks this to the Inspector likes it's a normal thing where as he should not approve of that with his role in the community. He thinks very highly of himself thinks he does a lot for the community he thinks he will be on the next honours list to be knighted and then get a title. "There's a fair chance that I might find my way into the next Honours List. Just a knighthood, of course". Mr Birlings wealth and own age of his business means he has friends also in high places. An example of his role is in Act 3 at the end of the play he uses his position to get information he wants from the police, when if anybody else did this the information would be denied. ...read more.

"Agitated now", "Rather cowed", "Dubiously", and "Stung". She is shown not to be in emotional control. The Inspector is catching her out every time. In contrast Goole is often said to speak "Sternly", "Severely", "Very deliberately", "Coolly", "Gravely", "Steadily" and "With calm authority". He is mainly shown to be in emotional control of himself- "Imperturbable"- as well as in control of other characters. There is contrast between the Birlings and the Inspector, there is much less control in the Birlings emotions. When the Inspector does show emotion its anger, reflecting his outrage at the callous and selfish behaviour of the Birlings. The stage directions often give a helpful indication of how different characters respond to Goole's interrogation and they highlight the contrasts between the characters and their reactions to the death of Eva. The stage directions are there to help to add to the dramatic impact of the play and also enhance the reader's understanding on the characters and their emotions. Conclusion The Inspector makes a massive impact on the Birling's night. He causes a lot of confusion to the audience and the characters. There are many interpretations of what the Inspectors purpose of him being there and his role to Eva Smith. Priestley hints several times at Goole being a figment of the Birlings' drunken imagination. With the Inspector showing the photograph of Eva at separate times to each person gives the suspicion that he is there to play a trick on the family or he knew that each person did morally wrong to different girls but wanted to point out their wrong doings. Either way he hopefully changed the Birling family for the better. Daisy Evans ?? ?? ?? ?? ...read more.