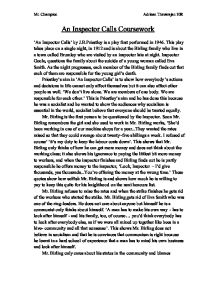 An Inspector Calls Coursework 'An Inspector Calls' by J.B.Priestley is a play first performed in 1946. This play takes place on a single night, in 1912 and is about the Birling family who live in a town called Brumley who are visited by an inspector late at night. Inspector Goole, questions the family about the suicide of a young woman called Eva Smith. As the night progresses, each member of the Birling family finds out that each of them are responsible for the young girl's death. Priestley's aim in 'An Inspector Calls' is to show how everybody's actions and decisions in life cannot only affect themselves but it can also affect other people as well. 'We don't live alone. We are members of one body. We are responsible for each other.' This is Priestley's aim and he has done this because he was a socialist and he wanted to show the audiences why socialism is essential in the world, socialist believe that everyone should be treated equally. Mr. Birling is the first person to be questioned by the Inspector. Soon Mr. Birling remembers the girl and she used to work in Mr. Birling works, 'She'd been working in one of our machine shops for a year...They wanted the rates raised so that they could average about twenty-five shillings a week. I refused of course' 'it's my duty to keep the labour costs down'. This shows that Mr. ...read more.

This shows how self-centred Sheila. She also did not want the dress without thinking why she did not want it; this was all because of a very bad mood she was in. If she had listened to her mother or the assistant manager, then Eva Smith will still be working in Milwards. When Sheila realise what she has done, '(She almost breaks down)... How could I know what would happen afterwards?' This shows Sheila does not think about what she does properly. Sheila shows her feelings as being upset because of her vulnerable conscience. This shows how truthful the inspector is when he and Mr. Birling say Mr. Birling: 'You seem to have made a great impression on this child', Inspector: '...We often do on the young ones. They're more impressionable.' Afterwards, Shelia thinks that at the time she thought it was the right thing to do, 'Yes, but it didn't seem to be anything very terrible at the time'. This shows that Shelia makes up her mind without really thinking about what she is doing and capitalises on the power she has, by sacking Eva Smith, a very spoilt child. Shelia also thinks to herself how dim-witted it was when she was speaking to Eric, Eric: 'My God, it's a bit thick, when you come to think of it... ...read more.

giving her some money, 'she'd no money left so I insisted on giving her enough money to keep her going until she refused to take any more' she realised that it was stolen and did not take any more. Mr. Birling anxiously asked where he got the money from and when Eric replied he was furious, he makes sure that Eric pays him back for all the money he stole out of Mr. Birling's office. This shows that he had passion for her and was trying to help her to live on. Priestley's aim is to convey that everybody's actions and decisions in life cannot only affect themselves but it can also affect other people as well. Priestley aim is to convey his play in a biased way to show why caring for other people is good and why people are wrong to always think about themselves. He makes Gerald a man who cares for everyone, even the poor hence he was passionate for Eva Smith/Daisy Renton. Priestley makes everyone else hate her and unfortunately make her die. Also Priestley has made Mr. Birling ignorant and after he finds out that the Inspector is fake he carries life like normal same with Mrs. Birling and Gerald. However Sheila and Eric feel awful that they cannot change their way and hope that they will not do this to anyone else. ?? ?? ?? ?? Mr. Champion Adriean Thevarajan 10R ...read more.