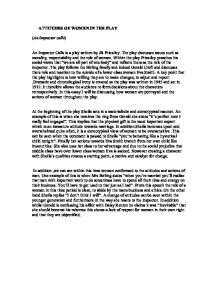 ATTITUDES OF WOMEN IN THE PLAY (An Inspector calls) An Inspector Calls is a play written by JB Priestley. The play discusses issues such as morality, respectability and the role of women. Within the play Priestley preaches his social views that "we are all part of one body" and reflects them as the role of the inspector .The play follows the Birling family and indeed Gerald Croft and discusses there role and reaction to the suicide of a lower class women Eva Smith. A key point that the play highlights is how willing they are to make changes, to adjust and repent .Dramatic and chronological irony is created as the play was written in 1945 and set in 1912 .It therefore allows the audience to form decisions about the characters retrospectively .In this essay I will be discussing how women are portrayed and the actions of women throughout the play. ...read more.

You'll have to get used to that just as I had". From this speech the role of a women in this time period is clear, to abide by the mans business and ethics .On the other hand Sheila replies "I don't think I will". A change of attitudes can be seen within the younger generation and furthermore in the way she reacts to the inspector. In addition whilst Gerald is confessing his affair with Daisy Renton he claims it was "inevitable" that she should become his mistress this shows a lack of respect for women in their own right and that they are objectified. Furthermore ,Sheila is seenas venerable and her parents wish to protect her from the truth. For example it is often said in the play "Miss Birling ought to be excused". Moreover the family asked for Sheila to be excused from Gerald's confession; this is ironic as she is the person who will benefit from listening the most as Sheila says "your forgetting I'm engaged to the hero ...read more.

Despite this Daisy manages to uphold moral values for example she did not marry Eric as she did not love him as the text states "she said she didn't love me and all that " .Furthermore she did not accept stolen money . She also was a "ring leader" at Mr Birling works .This shows that despite being a woman and of the lower class she has managed to provide more areas of respectability than the entire Birling family who obtain positions for example the head of a charity. In conclusion, the view of women in this time period was very dim .They are often objectified and mistreated by men. On the other hand hope is offered in the form of Sheila and Eva Smith as both make strides in improving themselves and upholds moral values .However it has been proven that morality is not directly proportional to respectability as Mrs Birling is stuck in her ways and although occupies important role is not willing to feel guilt or take blame. ...read more.

There is some quite good analysis in this essay. Good references and quotations are used to support points being made and some useful insight into the female characters is shown.

Paragraph construction is quite well controlled but sentence structures are loose, with frequently poor punctuation.