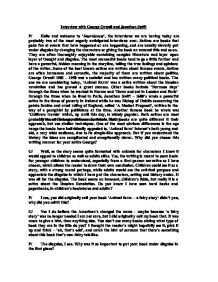 Interview with George Orwell and Jonathan Swift P/ Hello and welcome to 'Interviewest', the interviews we are having today are probably two of the most eagerly anticipated interviews ever. Satires are books that poke fun at events that have happened or are happening, and are usually cleverly put under disguise by changing the characters or giving the book an unusual title and so on. They are often thoroughly enjoyable containing complex literature and layer upon layer of thought and disguise. The most successful books tend to go a little further and have a powerful, hidden meaning in the storyline, telling the true feelings and opinions of the writer. Some of the best known satires are written about famous events. Satires are often humorous and sarcastic, the majority of them are written about politics. George Orwell 1903 - 1950 was a socialist and has written many political books. The one we are considering today, 'Animal Farm' was a satire written about the Russian revolution and has proved a great success. Other books include 'Burmese days' through the times when he worked in Burma and 'Down and out in London and Paris' through the times when he lived in Paris. ...read more.

J/ Disguise was very important to me as an author also, and I didn't want people to look at my novel immediately and see it was a satire, as Mr Orwell with 'Animal farm'. The main reason for this was the impact I desired. By making the pamphlet seem at first normal, the sudden change would shock the reader because they didn't expect it at all. I wanted to draw attention to the audience's ignorance, and shock them into realising how bad the situation had got. I hoped they would then take an interest. This was very important to me because not only was this satire written for enjoyment, as 'Animal farm' but I wanted to use it to gather a group of people who shared my opinion (I knew I wasn't the only one) and possibly make a difference. It greatly annoyed me that the majority of people (apart from the ones dying of starvation) refused to accept how atrocious the situation had become. The Landlords and the rich of course knew it, but didn't want it to change, as they benefited from the situation. Yes, it was mocking the pamphlets and leaflets of the time, you see, they annoyed me greatly, all this talk and no action, empty promises and pretentious problem solving lies. ...read more.

But with satire's you are openly expressing your opinion and there's always a risk someone is not going to share it and therefore not like it, but I'd say the majority of people shared my opinion anyhow. I also was relying on people's intelligence to spot the satirical writing, for the success of my book. P/ Who would you both say influenced you to write your novels? J/ A writer called Dryden wrote the poem 'Mackfleknoe', I was greatly influenced by him, the poem was a classic, but I would say most of my inspiration came from what I could see was happening around me and how it greatly annoyed me day by day. G/ I was also mainly inspired by what I had seen in the revolution, I was influenced by book before I had written it, my travels and the people I had met. I was actually also greatly inspired by Mr Swift, I kept telling myself I would love to write a satire about the revolution and so I finally did. P/ In both satires symbolism is used, most especially in 'Animal farm'. REFER 2 LANGUAGE USED INDIVIDUAL CHARACTERS AND SYMBOLISM PAGE 3 THEMES - EQUALITY PAGE 10 PROPOGANDA PAGE 9 - look at in more detail EFFECT ON AUDIENCE - if not already dun MODERN RELEVANCE SATIRE? ...read more.