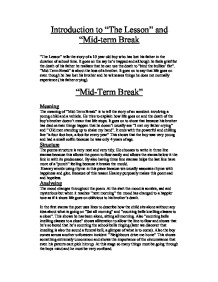 Introduction to The Lesson and Mid-term Break

Introduction to "The Lesson" and "Mid-term Break "The Lesson" tells the story of a 10 year old boy who has lost his father in the duration of school time. It goes on the say he's trapped and although he feels grief for the death of his father he realises that he can use the death to "bind the bullies' fist". "Mid-Term Break" is about the loss of a brother. It goes on to say that life goes on even though he has lost his brother and he witnesses things he does not normally experience (his father crying). "Mid-Term Break" Meaning The meaning of "Mid-Term Break" is to tell the story of an accident involving a young child and a vehicle. He tries to explain how life goes on and the death of the boy's brother doesn't mean that life stops. It goes on to show that because his brother has died certain things happen that he doesn't usually see "I met my father crying" and " Old men standing up to shake my hand". It ends with the powerful and chilling line "a four foot box, a foot for every year" This shows that the boy was very young and had a small coffin because he was only 4 years of age. Structure The poems structure is very neat and very tidy. He chooses to write in three line stanzas because this allows the poem to flow easily and allows the stanza below it the link in with its predecessor. ...read more.

Snowdrops represent innocence and I think Heaney is trying to relate innocence to the death of the boy's brother. The boy looks at his brother "paler now" which may mean the body is paler because of death or the boy hasn't seen his brother for so long his brother is paler in his mind. The last but one stanza explains how the boy died "the bumper knocked him clear". This helps the reader understand more easily how the child died and also gives us an idea of how tall the boy is. Bumpers are very low so the child must have been very small. The final stanza finishes with the chilling line "a four foot box, a foot for every year". The word box must suggest that coffin is very small and also the size of it tells us the boy is 4 years of age. Comparisons of This poem and the next Comparisons between the next poem and mid-term break are that they are both about the death of a family member and they both try to explain that life goes on. "The Lesson" Meaning The meaning of the lesson is very similar to that of "Mid-Term Break. The poet captures the boy's emotions at the moment he learned of his father's death. He focuses on the realisations that the boy reached during this particular incident. Not too much detail is given of the actual story, but more focus is given to his reactions and feelings. ...read more.

The speaker is focusing on external objects rather than on inner feeling. The indifference of the goldfish again reminds us of the speaker's detachment, his distance from grief. Their eyes are turned away from him, just as he turns away from sadness. However, "All the other eyes/ Were turned towards" the speaker, and he is the centre of attention. The earlier reference to bullies suggests that the speaker was not too happy at school; but now, for once, he is the recipient of attention and sympathy. Because of this, he suddenly experiences another emotion we do not normally associate with someone who has just learnt of a parent's death. "Pride, like a goldfish, flashed a sudden fin": we can imagine the goldfish swimming in their bowl, perhaps set in the sunshine on a windowsill. The sun catches a goldfish at a certain angle, and the gold of its scales suddenly shines brightly. The speaker, caught in the sunshine of all this attention and sympathy, suddenly feels pride shining in him. At no point in this poem does the speaker express sadness at the loss of his father. However, he is aware that he should feel something, and his shame at the lack of feeling is in conflict with his relief and his pride. What is uppermost in the speaker's mind is the confined little world of the school (rather like the "shining prison" of the goldfish bowl). His life is centred on school, the bullying, his other school-mates. I think the bitter lesson he learns is about his own self-centredness. Conclusion ...read more.