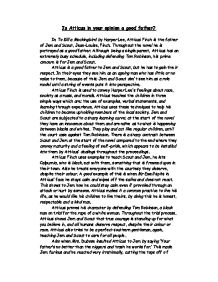 Is Atticus in your opinion a good father? In To Kill a Mockingbird by Harper Lee, Atticus Finch is the father of Jem and Scout

Is Atticus in your opinion a good father? In To Kill a Mockingbird by Harper Lee, Atticus Finch is the father of Jem and Scout, Jean-Louise, Finch. Throughout the novel he is portrayed as a good father. Although being a single parent, Atticus has an extremely busy schedule, including defending Tom Robinson, his prime concern is for Jem and Scout. Atticus is a good father to Jem and Scout, but he has to gain their respect. In their eyes they see him as an ageing man who has little or no value to them, because of this; Jem and Scout don't see him as a role model until a string of events puts it into perspective. Atticus Finch is used to convey Harper Lee's feelings about race, society as a mass, and morals. Atticus teaches the children in three simple ways which are; the use of examples, verbal statements, and learning through experience. Atticus uses these techniques to help his children to become upholding members of the local society. Jem and Scout are subjected to a sharp learning curve; at the start of the novel they have an innocence about them and are na�ve as to what is happening between blacks and whites. ...read more.

Dubose gave him, reading aloud to her for two hours every afternoon for a month. This showed Jem that he should not react irrationally, and what ever he does that is wrong, he should be willing to pay the price. Atticus treats Mrs. Dubose with respect even though she is being harsh to him and his children, he still manages to treat her in the kindest manner. He compliments her appearance, also helps her into her chair. He understands the children's impressionability, and realises the learning value of such an experience. Not only do the children leave "the Mrs. Dubose situation" with a better understanding of death and the importance of companionship, Jem and Scout lay down foundations for their own belief system in regards to respect and courage. After Mrs. Dubose's death, Atticus takes his parenting role to a verbal level and states his reaction to what the children have learned. "I told you that if you hadn't lost your head I'd have made you go read to her. I wanted you to see something about her; I wanted you to see what real courage is, instead of getting the idea that courage is a man with a gun in his hand." ...read more.

Therefore, the statement of his beliefs is a highly effective way of communicating with the children. Early in the novel, Scout overhears Atticus having a discussion with Uncle Jack. She discovers some of his hopes for Jem and herself when Atticus states "Well, most folks seem to think they're right and you're wrong..." "They're certainly entitled to think that, and they're entitled to full respect for their opinions," said Atticus, "but before I can live with other folks I've got to live with myself. The one thing that doesn't abide by majority rule is a person's conscience." Atticus believes that a persons' courage stems from their soul. He also implies that courage can be found in those that hold on to their values and not get influenced by other people's thoughts; this thought is strongly pressed by Atticus all the way through the novel. He teaches Jem and Scout that an open mind is necessary to form true opinions of someone; also opinions of others should be respected. Atticus uses two of the most effective forms of teaching to demonstrate his beliefs for his children. The first being the simple statement of what he believes..."but before I can live with other folks I've got to live with myself." The other method of teaching he uses is trial and error. ...read more.