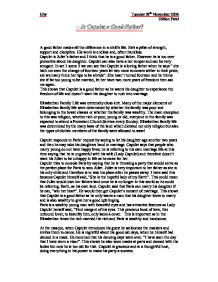 Is Capulet a Good Father

Is Capulet a Good Father? A good father makes all the difference in a child's life. He's a pillar of strength, support and discipline. His work is endless and, often thankless. Capulet is Juliet's father and I think that he is a good father. However he is too over protective about his daughter. Capulet can also have a hot temper and can be very arrogant. In act 1 scene 2 we can see that Capulet is a loving father when he says " she hath not seen the change of fourteen years let two more summers wither in their pride, ere we many think her ripe to be a bride". She hasn't turned fourteen and he thinks she if far too young to be married, let her have two more years of freedom then ask me again. This shows that Capulet is a good father as he wants his daughter to experiance the freedom of life and doesn't want his daughter to rush into marriage. Elizabethan Family Life was extremely close-knit. Many of the major elements of Elizabethan family life were determined by whether the family was poor and belonging to the lower classes or whether the family was wealthy. ...read more.

He trusts people will do the right thing and that being the right thing is what he wants them to do. When Tybalt refuses to leave Romeo alone, Capulet reacts by ordering Tybalt to control himself and to act like a gentleman. He tells him he shall have to tolerate him as he said he should. "He shall be endured what Goodman boy I say he shall". Capulet would not like Romeo to be insulted in his house as he wants God to mend his soul. "You'll not endure him! God shall mend my soul!" It could mean he doesn't want any trouble he just wants God to forgive him for his past troubles so doesn't want to carry on with this war with the Montague's. This tells us that Capulet becomes a fair and open minded character as he allows Romeo to attend his party even though he is a Montague. He just wants to have peace with them but also sometimes wants to fight them. This shows Capulet can be a loving character as even though Romeo was of the Montague family, he still trusted him not to do anything bad at the party. ...read more.

Firstly, in act 1 scene 2 he lets Paris know that he does not want his daughter to marry at such a young age. He obviously does this for a reason as he relates to his own marriage in the play and he wants his daughter to go threw two more years of having wisdom and openness. " She hath not seen the change of fourteen years let two more summers wither in their pride, ere we many think her ripe to be a bride". Secondly Capulet tells Paris that if he cannot wait two years he can try and get Juliet to fall in love with him at the masque he is throwing. Thirdly Capulet tells Juliet that she will marry Paris when he cousin Tybalt died as he said, "Sir Paris, I will make a desperate tender of my child's love: I think she will be ruled in all respects by me; nay, more, I doubt it not". Capulet is doing this as I think that he realises that life can be taken away from some by the blink of an eye. He wants his Juliet to be happy so tells Paris to marry her. This shows that Capulet is a good father as many things to see his daughter happy and in high spirits. H/w Tuesday 28th November 2006 Dillion Patel ...read more.