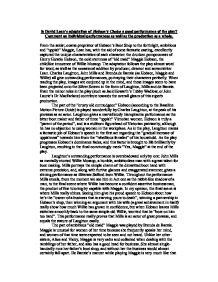 Is David Lean&amp;#146;s adaptation of Hobson&amp;#146;s Choice a good performance of the play? Comment on individual performances as well as the production as a whole.

Is David Lean's adaptation of Hobson's Choice a good performance of the play? Comment on individual performances as well as the production as a whole. From the s****t, coarse proprietor of Hobson's Boot Shop to the forthright, ambitious and "uppish" Maggie, Lean has, with the aid of some fantastic casting, excellently captured the unique characteristics of each character: the drunken pompousness of Henry Horatio Hobson, the cold sternness of "old maid" Maggie Hobson, the childlike innocence of Willie Mossop. The adaptation follows the play almost word for word, as well as the occasional addition by producer, director and screenwriter Lean. Charles Laughton, John Mills and Brenda de Banzie (as Hobson, Maggie and Willie) all give outstanding performances, portraying their characters perfectly. When reading the play, images are conjured up in the mind, and these images seem to have been projected onto the Silver Screen in the form of Laughton, Mills and de Banzie. Even the minor roles in the play (such as Jack Howarth's Tubby Wadlow, or John Laurie's Dr MacFarlane) contribute towards the overall gleam of this superb production. The part of the "crusty old curmudgeon" Hobson (according to the Baseline Motion Picture Guide) is played wonderfully by Charles Laughton, at the peak of his prowess as an actor. ...read more.

Unlike her other sisters, Alice and Vicky, Maggie is very calm and collected when dealing with the ramblings of her father, and also has a good head for business. She almost single-handedly runs her father's boot shop, and without her the business would almost certainly fall apart. De Banzie's manner while playing Maggie is very much like that of a strict head teacher, but she has a softer side, as we see later on in the performance. Maggie's curt manner is performed superbly by de Banzie, as is her stubborn and determined nature. When her father announces that she's "past marrying age" she seems determined to prove him wrong, and she does: not only does she marry Willie Mossop, but she sets up her own boot making business, which prospers and even starts to rival the great Hobson's. She reveals her softer side, though, when we see her glowing with pride in the final act, when Willie is successfully "high-handed" with Hobson, Alice and Vicky. As well as the three main characters (Hobson, Willie and Maggie) there are other minor characters that make the finesse of the adaptation complete, and who are no less important. Daphne Anderson and Prunella Scales are wonderful as Hobson's snobbish, almost spoilt younger daughters Alice and Vicky. ...read more.

The part where Hobson is delusional due to his many years of heavy drinking is a perfect example of the effects in Hobson's Choice, because in that scene Hobson imagines he sees a swarm of mosquitoes attacking him, and then imagines a man-sized rabbit at the foot of his bed. Overall I think that David Lean's adaptation of Harold Brighouse's Hobson's Choice is a marvel of its time. It sticks to the play almost word for word, and with the small changes that have been made the conversion from book to screen worked perfectly (although I think that Dr MacFarlane's role in this performance ends much too abruptly). The conflicting personalities of Hobson and Maggie are brought to life marvellously by Laughton and de Banzie, while John Mill's timid Willie Mossop is stuck hopelessly in the middle. The grim streets of Victorian Salford make for the perfect background of this macabre slice of urban drama, while the comical antics of its residents lighten the atmosphere, making the genre of this performance somewhat enigmatic: comedy or drama? Whatever it is, it is certainly an intelligent piece of work (Hobson's entrapment by eldest daughter Maggie so that he is forced to award her and her sisters financial settlements is exceptionally clever), and Lean should be congratulated. Matthew Gibson, B10. ...read more.